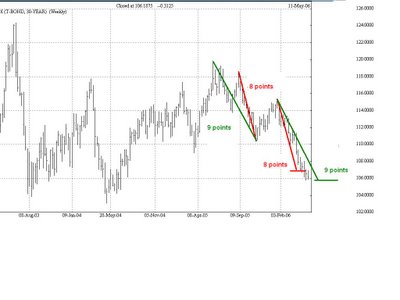 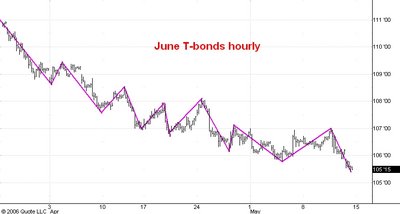 As you can see from the hourly chart the market has shown a steady and very long sequenc of lower highs and lower lows since its high in January at 115-05 in the June contract. Until this sequence is broken I have no reason to think a rally of more than a point or two is likely.

On the other hand looking at the weekly chart we see that we can project a drop from the January top of 115-05 in two ways.

The second calculation is illustrated by the green lines. If the drop from 115-05 were to equal the drop from the June 2005 top near 120 to the November 2005 low near 110 it would be nearly 10 points and end near 105-16 or so. The market has reached that level today and I think this justifies putting more than ususal weight on any short term bullish indication.

Without worrying too much about exact timing or exact projections for the peak in rates I will say that I do think the interest rate markets are very near their peak yields for this cycle and I do think that the next substantial move in yields from here will be downward. Of course this means that the next big move in bond prices from here will be upward.
Posted by Carl Futia at 1:15 PM