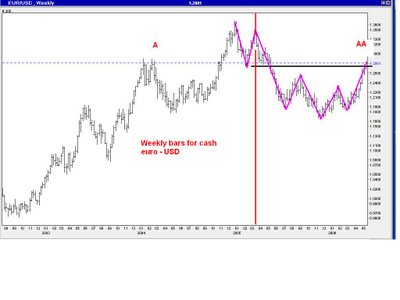 Here is a weekly chart of the cash euro-USD pair. I last commented on this market here.

I have a number of reasons to be bearish at this juncture. Perhaps the most important is the unreasoning bullishness shown by so many who expect the US Dollar to go into the tank here.

But I have other technical reasons for my view. On the chart you can see the drop from the 136.66 top in December 2004 does not have the obvious three phase look of a completed corrective move. On the other hand, the move up from the 116.40 low made in November 2005 does have a definite three phase look. The market has rallied about 1200 points from its low, just about as long a correction as the two big corrections within the big move up from 100.00 in 2002 to the 136.66 high in late 2004.

I think the next big move in the euro-USD will be downward. This foldback chart predicts a low near 108 about 18 months after the center line. This would be September 2006.
Posted by Carl Futia at 3:21 PM

Carl, In your May 4th 2005 explanation of the "fold-back char", you wrote that it is based on "time symmetry centered at an important low or high."

However, in this example, you have centered that chart on a minor high in March '05, instead of the important (all-time) high in December '04.

Would you please explain why ?

The placement of the vertical symmetry line reflects my own artistic judgement of the situation.

This is one more illustration of my assertion that speculation is at least as much an art as a science.