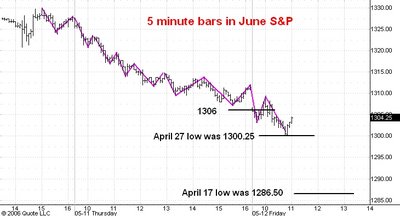 Here is a 5 minute bar chart showing regular hours trading in the June S&P e-mini futures. I last commented on this chart yesterday.

I thought we would see a low around 1306 because at that level the drop from 1331 would have equalled the the preceeding reaction from 1324 to 1300. But no support materialized there so we have to look at previous reactions within the move up from the October 2005 low at 1172 to get some idea of where this reaction might stop.

As you can see on the chart above the pattern of lower lows and lower highs has yet to be broken. When it is we will have a sign that the second phase rally has begun.
Posted by Carl Futia at 10:55 AM