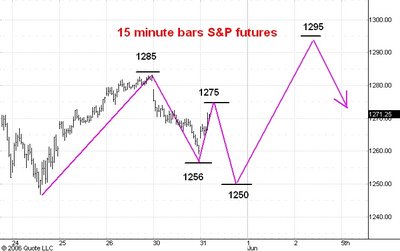 Here is a 15 minute bar chart showing regular hours trading in the June S&P e-mini futures. I last commented on this chart here.

I have been thinking that the market would compete the second phase of a three phase rally at 1256 and then begin the third phase up to 1295. Early this morning the S&P's dropped to 1256 in electronic trading (not shown on the chart) and have since rallied nearly to 1272.