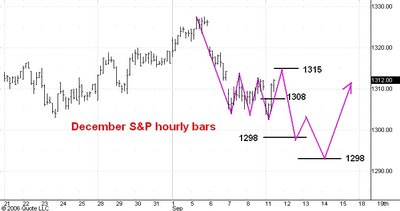 Here is an hourly chart of the December S&P e-mini futures. I commented on this chart earlier today.

I had thought that today's weak open was the harbringer of the third third phase of the correction which started from the 1327 level in the December contract last Tuesday. I now expect this correction to carry the market down to 1293 or so.

Instead of bouncing off of the 1308 level the market blew right through and so far has traded as high as 1312.25. My best guess now is that the rally will continue up to my original target of 1315 or perhaps a point or two higher. After that I still think we shall see a three phase break down to 1293 followed by a very strong move up to new highs for the bull market.
Posted by Carl Futia at 1:13 PM

Carl,
I am agree with you
Today (Tuesday) after a possible retracement the price will head to 1315-1318. The top will happen Friday. I am somehow sure about this.