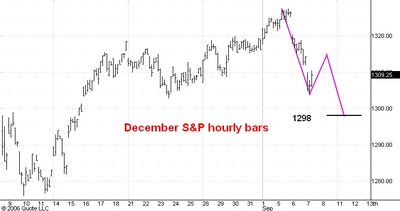 I last commented on this market yesterday.

This morning's low at 1293 in the September contract and 1304 in the December contract was probably the end of the first phase of the ongoing three phase correction. The second phase rally will probably carry the December contract close to 1315 and be followed by a third phase drop to a correction low near 1298. Once the 1298 level is reached I shall start looking for a rally to new bull market highs above 1330.
Posted by Carl Futia at 12:33 PM