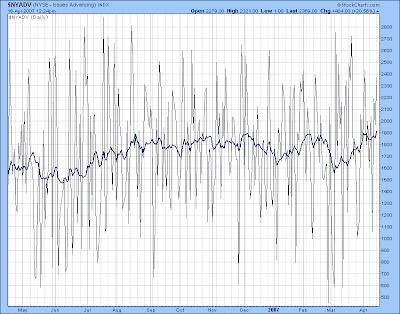 Here is a line chart showing the daily count of the number of issues traded on the New York Stock Exchange which advance in price. The solid blue line is the 20 day moving average of this number. I last commented on this indicator here.
Today the 20 day moving average has moved to the highest level it has seen in more than a year. In particular it is higher than at any time since the June 14 low in 2006. Based on my observations this means that the market averages will trend higher for a least two more months and perhaps for as many as four more months. In other words, a bull market top is not likely until mid-June at the earliest.
This conflicts with the Lindsay Three Peaks and a Domed House projection for a top in mid-May, a projection which was supported by an analysis of Lindsay's basic advances and declines.
Right now I am inclined to go with the indications of the advancing issues indicator and this leads me to expect that the top of the domed house will be delayed at least until mid-June, or that point 27 will be the top of the bull market, not point 23.
Posted by Carl Futia at 12:26 PM

I am confused by your analysis. If the 20 day moving average is at a high, what makes you expect it to go higher? Wouldn't your contrarian analysis point to the market peaking here in the next few weeks?