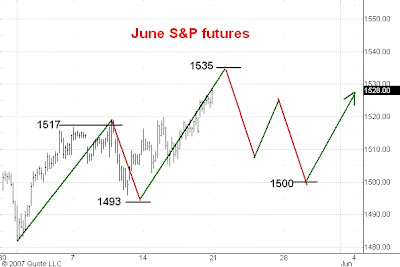 Here is an hourly chart of the June S&P futures. The Spiders chart looks the same after dividing prices by 10. I last commented on this market here.
I think the 1535 level will prove to be strong resistance in the futures and that the Spiders will encounter strong resistance at 153.20. I expect the subsequent reaction to be comparable to the reaction of late March which dropped the futured from 1451 to 1418 or 33 points. (3.30 points in the Spiders). So the downside target is 1500 in the June futures and 150 in the Spiders. After this break I think the market will rally to new bull market highs.
I should point out in passing that the Spiders made a very important top on September 1, 2000 at the 153.60 level which ended a big, 4 and 1/2 month rally. This was a close test of the bull market high of March 2000 at 155.75. As a rule a market becomes vulnerable to a substantial reaction once it approaches and old top of significance. The Spiders are near the September 2000 top right now but I think the reaction will be relatively mild. I am looking for a much bigger reaction once the Spiders get close to their 2000 top at 155.75.
The Q's have been noticable underperforming the Spiders for the past few weeks. This is another sign that a reaction in the general market is imminent. I expect the Q's to drop to 45.00 and then to rally to new bull market highs.
Posted by Carl Futia at 9:27 AM