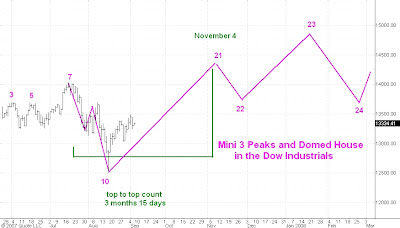 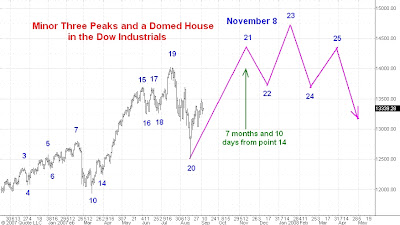 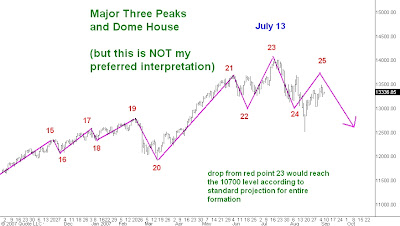 Here are three daily charts of the Dow Jones Industrial average. On each I have labeled turning points according to the scheme invented by George Lindsay for describing the market's progress through his Three Peaks and a Domed House formation. I last commented on this subject here.

The first chart you see above this post depicts a major Three Peaks and a Domed House formation. It is a major formation because at least 6 months elapsed between the first and third peaks (points 3 and 7, not shown on the chart). I have to admit that this chart which I first presented here has fit very well with the market's movements. It is not my preferred scenario because the level of bearish sentiment at the August low point is simply not consistent with the typical situation which accompanies a point 24 low. Even so, should the market rally into the late-September, mid-October time frame without making new bull market highs I shall reconsider this position, especially if obvious bearish divergences accompany the rally.

For the time being however I am going with the second and third charts above this post which depict minor and mini examples of the Three Peaks and a Domed House phenomenon. The mini formation is especially significant because if it is valid (and I think it is) then the implication is that the bull market is not complete and that a rally to new highs is imminent. (The reaction I have been expecting in my daily guesstimates would put in the point 14 low in this mini formation.)

In both the mini and the minor formations I have labeled a November top as point 21 rather than as point 23 (the ultimate bull market top). The reason for this is that if the rally from the August lows does reach new highs I think it will last at least three months and probably more from bottom to top because of the severity of the July-August reaction.
Posted by Carl Futia at 9:45 AM

Thanks for the domed house update Carl - much appreciated!

Thanks for the update, I truly appreciate it.

I have a hard time with your predictions of new market highs in light of new information (Highest level of foreclosures in 55 years, etc., etc.)

It is nice to see you show a different forecast even if it is not yet your proffered interpretation.

Carl, I wonder if on the major scale the July 13th high could be point 21 and the August low point 22? I am not so clear on what the timing parameters Lindsay requires are.... It would make a very long span from point 19 to point 21; is that not allowed?

Enjoy your work and do you do much sentiment work with this are you familiar with Will Rahal and do you sell the rallies in a Huge Bull Market rally or buy the dips. Does the credit crunch do anything but lengthen the bull market as the Fed is Forced to lower rates?
Great site .

carl
thanks for the updated 3 peaks domed huse pattern . the chart
you leased preferr i tend to agree with the most . and i too have
concerns relating to te over sold readings . yet the pattern is the cleanest as i see it . if it proves to be correct then feb march 2008 would probably be a bottom near 10313 as i see it
which falls with in your 10700
area . and this would also imply
2008 as a bullish year .
overall im of the opinion that we are only begining a major bear market andyet a restest of the highs or a possible break above them should come in late 2009.
if the 3 peaks domed house pattern which you least preferr is taking place it to me actually fits
the longer term bearish picture better then the others . we will see soon enough .
food for thought , next week
sept 14th - 21 st is where my next cycle turn is . ideally this time frame is a high .
key for me relating to the dow
is 13668.11 on a weekly closing basis and 13628 on a monthly closing basis . those 2 levels are where i main resistance levels are
on a closing basis weekly and monthly respectively.
i still label all of this as a complex wave , under one scenerio
we get the 5 touchpoints in a narrowing wedge formation . this
implies 12200-12180 area as the monly closing low . under the more bearish scenerio 10313 is due into
march 5th 2008 . the 10 day advance decline line though
bottomed on the exact cycle low date on july 27 th . and this is where my concern lies . the 10 day adline may have actually bottomed
and this leaves the bullish scenerio in tact yet it can also mean we are seeing something more complex as it comes back to test its lows as it is already up into its upper range . next if you are to look at the sox index on a weekly bar chart from 2002 lows
it apears to be in a very large narrowing triangle which ideally
should come back to 430 .
if this was to come near jan march 2008 time period . then the sox would have completed the pattern and would be in for a very large
run to the upside . so while im bearish now im going to become increasinly bullish for all of 2008
in a true bear market the indicators do not work . so we have to now take a look at everything . i for 1 think housing is bottoming if not bottomed for now . yet we will not see the data
improve untill after march 2008 .
those who buy houses liked to be moved in before school starts generally speaking . so housing numbers from here on out should be veiwed as suspect to there normal seasonal patterns . as for the banking index . that one happens to leave me a bit with a bullish note .
ill end this with a , im with you
on most of your toughts and while i may not agree on direction
i do agree on the internals of the market and im not betting the farm
as i am open to which ever the market brings us . the hype and hope of the fed to me , is simple by the rumor sell the fact .
good work today .

Thanks Carl, you're always a good read.

Carl,
Thank you for updating your George Lindsay point counts.

I came across another article for library of contrarian perspectives at the link below.