Another Long Term Look at the S&P 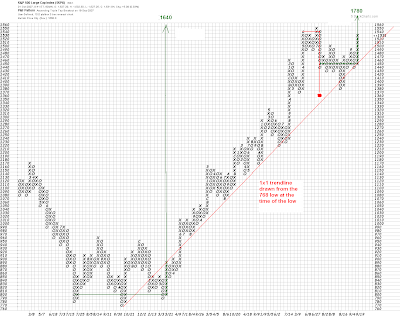 Here is a point and figure chart of the cash S&P. Each box is 10 points high. I last commented on this chart here.

As you can see the August low formed at the long term support line which rises from the 768 low in 2002 and also developed at a price level just shy of the downside count target from the June-July 2007 top. This is a good indication that the bull market is still in progress.

Next note that the long term count target which developed at the 2002 low is still above us at 1640. Moreover, you can see an upside breakout from a big base which formed during August. A count from this base projects mechanically to the 1780 level. I think this latter count target is a bit optimistic, but is does indicate that the bull market in the cash S&P is not nearly over.
Posted by Carl Futia at 9:54 AM