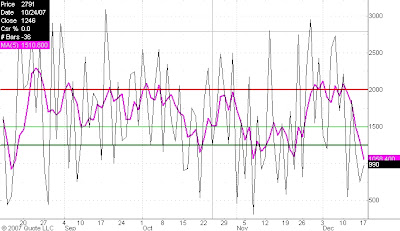 Here is a line chart of the number of issues traded on the New York Stock Exchange which advance in price. The purple line is the 5 day moving average of this number. I last commented on this indicator here.

It is my view that the drop which began after the Fed announced its latest rate cut is a normal reaction within an uptrend that began from the low on November 27 at 1417 in the March '08 e-mini contract and 1406 in the cash S&P. The advancing issues chart you see above shows that the market has moved down to an oversold condition roughly as deep as those in early and late November. Moreover, you can see that the daily numbers are making a low higher than the one made earlier on the way down from the December 11 high.

I think this indicator is telling us that the reaction is about over and that the market will soon resume its rally. I expect the e-minis to trade over the 1600 level sometime in January or February.
Posted by Carl Futia at 11:11 AM

Please take a look at
the Discount rate spread at

Until this discount rate spread is resolved I do not see how you can turn positive. It is currently much higher than the August lows or after 9/11

Here we are again.
You continue to pick bottoms and holding a losing position. If i have to guess, market will run your stop then bring it back up only to position you for another round of bottom picking trade.

Ive never heard so much bearishness and gloom and doom since 2002.

I listen to Bloomberg and CNBC on Sirius Satellite Radio. Bloomberg keeps parading guru after guru proclaiming doom and calamity. It's one huge bear festival.

Weren't you stopped out on your long E-mini ?

"Here we are again.
You continue to pick bottoms and holding a losing position. If i have to guess, market will run your stop then bring it back up only to position you for another round of bottom picking trade."

Look, genius, I know you are an expert at predicting the past by watching your rear view mirror very carefully. But why didn't you do all of us a favor and by telling me I was going to get stopped out when it would have done some good? Until you can start adding some value to the discussion I suggest you keep your snide and empty minded observations to yourself.

This is a crash,you should are out fo stockmarket to 21 january.
Regards.