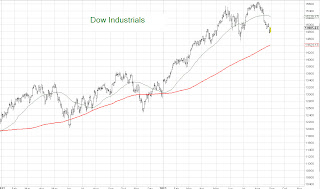 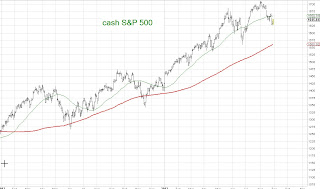 As you know I have been expecting a bull market top this fall or early in 2014. The timing of this top is suggested by Lindsay's 15 year period from bear market lows to bull market highs. There was a bear market low in August and October of 1998 in the Dow and S&P respectively. On many occasions Lindsay insisted that the Dow was more suitable for applying his methods than the more broadly based averages. So the top on August 2 in the S&P certainly meets the 15 year criterion (purists might observe that it is about 4 weeks shy of exactly 15 years from the August 1998 low in the Dow).

I have been counting one of Lindsays basic advances from the October 4, 2011 low. Such advances average about 2 years in length but there is a lot of variation around that mean - most basic advances last between 21 and 27 months. An August 2 top would make this basic advance last 22 months.

So in my judgement Lindsay's longer time periods are highlighting the possibility that August 2 was a bull market top. Experience shows that bull market tops are generally associated with visible bearish divergences longer term technical indicators and I have posted the charts of a few such indicators above.

The top three charts show three measures of the market's trend: the Dow, the S&P 500 and the New York Stock Exchange advance-decline line. Note that the S&P is the strongest of these three indicators right now. It is trading around its 50 day moving average and is only about halfway back to its June 2013 low. The Dow has been the weakest of the price averages since the August 2 top. Note that it is trading well below its 50 day moving average which itself has rolled over and has started to drop. The chart of the advance-decline line show a tiny bearish divergence at the August 2 top where it failed to move above its May 22 top even as the price averages moved above their May 22 tops. Since then the advance decline line has been about as weak as the Dow.

I'd say that these three indicators are now headed down to their respective 200 day moving averages (wavy red line on each chart). I don't see enough bearishness in the put/call ratio (bottom chart) to prevent a further substantial drop from current levels. Right now this long term moving average is in each case near the June 2013 low. If these three indicators all start trading below their 200 day moving averages I think it would be highly likely that a bear market has begun.

In addition to the advance-decline line divergence at the August top there were two other significant long term divergences visible at that time. The fourth chart from the top shows a 20 day moving average of the daily count of the number of S&P 500 issues trading above their 50 day moving averages. Note the three consecutive lower tops in 2013 which were associated with three consecutive higher tops in the market averages. This is a very obvious bearish divergence. The fifth chart from the top shows the 20 day moving average of the daily count of 12 month new highs on the NYSE. Note how the number at the August top was substantially lower than at the February and May tops.

All in all this looks like a pretty bearish picture to me. One should remember that not every bearish picture like this one gives rise to a bear market. But the current bull market has lasted 53 months, far longer than average, and by standard valuation measures the US stock market is substantially overvalued. So I think these warning signs should be taken seriously, especially when and if the averages start trading below their 200 day moving averages.

Thank you for that update, I appreciated your spotlight analysis on FB. If you have time ctooTerran you do one on Visa. Thanks, Janet

Thanks for posting. After ES 1553, do you expect a rebound to 1670 or so? (right shoulder of a head and shoulder pattern)before the real selling begins?

a recent JPM morgan poll asked investors the following: For Money you wouldn't need for more than 10 years, which one of the following do you think would be the best way to invest it?
Cash 26%
Real Estate 23%
Gold 16%
Stocks 14%
Bonds 8%
None/other 4%
don't know 8%
How can we be in a bull market top in stocks when it is in 4th place and cash is the #1 vote getter.
Bearish sentiment also has been climbing for the past month or so.
Are these the psychological conditions for a bull market top? thanks, Chris

Gosh, I should have proof read that. It is suppose to be, If you have time, can you do one on Visa? Thanks, Janet

Thanks for continuing to keep us updated on a daily basis. I read your blog each morning.

Does a top in the Dow/S&P change your outlook for gold in any way (i.e., a bottom has already been seen in the metals)?

I'm wondering when the people who read Carl on a regular basis will finally understand that he doesn't participate in comments, answer your questions here, or take requests.

I have been following Carl from day one and he DOES sometime answer questions submitted in the comment section. Obviously, there is no obligation to do so but there are times when he answer questions.