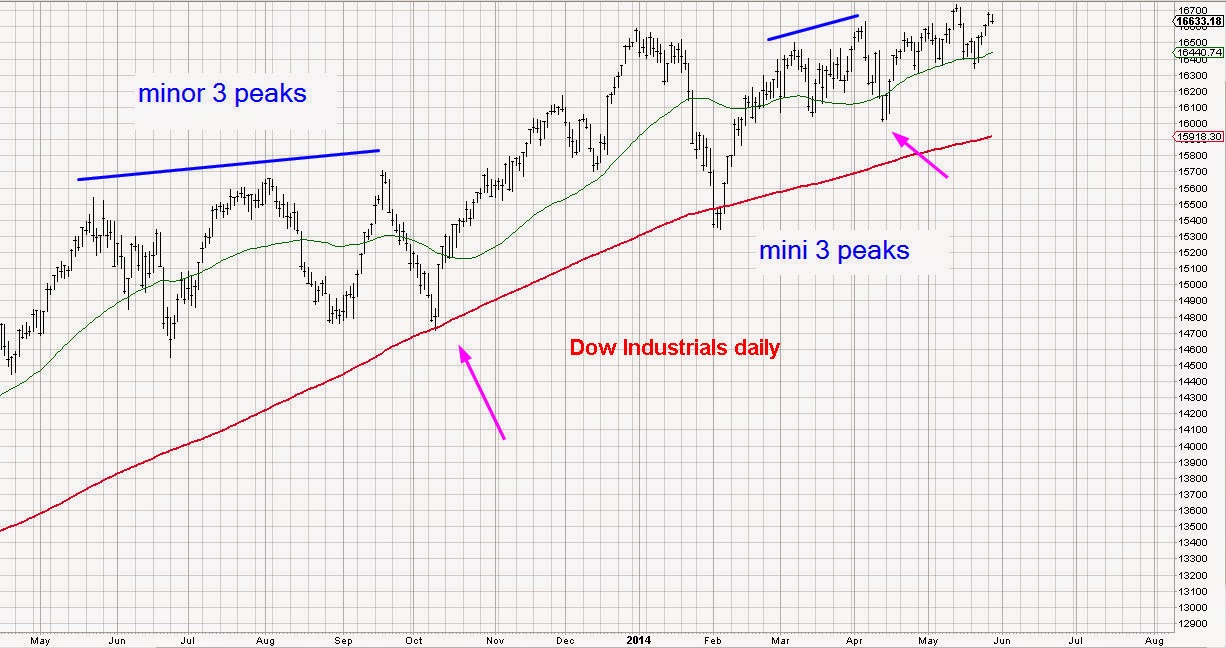 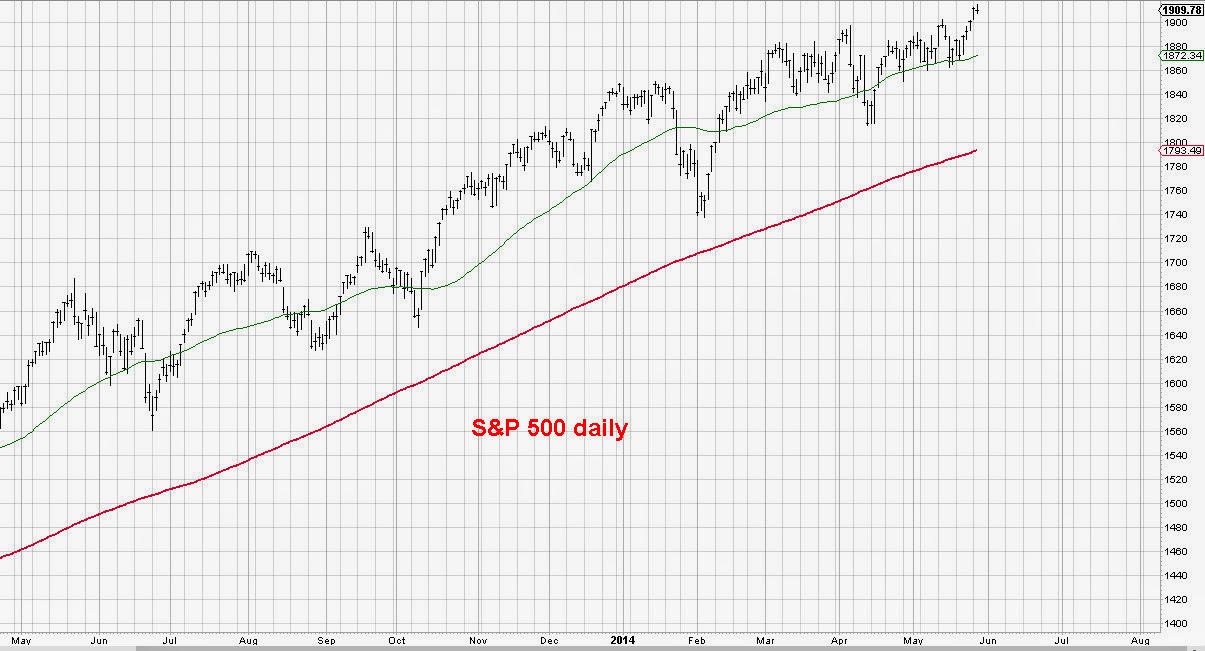 The up trend in the U.S. stock market indices continues and my best guess is that these markets are all headed higher. My upside target for the S&P is 1960. Unless and until both the Dow and the S&P drop below their 50 day moving averages (green lines) I see no reason for expecting a substantial drop from current levels.

One additional bullish indication is the provided by the 5 day moving average of the equity put-call ratio on the CBOE (bottom chart). This indicator is only just starting to come off its highest reading in a year, thus still indicating a preponderance of bearish trader sentiment. Until it drops close to its lows of the past year a significant drop in the averages is unlikely.

I had been concerned about the under-performance in the QQQ (second chart from bottom). This index appeared to have formed a bearish head and shoulders top. But during the past week the QQQ has moved upward out of a trading range which had formed at the hypothetical right shoulder. The QQQ is now well above its 50 day moving average and I think it may well reach 95 before the bull run is over.

I haven't commented on Lindsay methods recently so I thought I would update my analysis.

It now looks like an extended basic advance started from the October 2011 low's. Such advances typically last about 33 months. A repeat performance here would predict a market top in July 2014. Lindsay's 15 year 3 months period from bear market low to bull market high can be interpreted as starting from the early October 1998 low in the Dow. The top is already overdue but it is not unusual to see this period extend to 15 years 9 months. In the case such an extension would also point to a July 2014 top.

I have also been following a minor version of Lindsay's 3 peaks and a domed house formation in the Dow. The 3 peaks occurred in August -September of 2013 and the separating declined ended in October 2013 (point 10, first purple arrow). The domed house then began and I think it made its top (point 23) on December 31, 2013. Point 26 was the February 5 low and the Dow has since been rallying  to point 27 which in this case is actually above the top of the domed house.

This rally to point 27 appears to be encompassing a mini-version of the same, 3 peaks and a domed house formation. The separating decline in this mini-formation ended at the April 14 low (second purple arrow, point 10) and the Dow is currently moving upward in the rally to the top of the domed house. It looks like this domed house is at its "five reversals" stage and this means that the top is not yet in. If you look closely you will see that this "five reversals" has actually taken the form of a micro-3 peaks and a domed house (not labeled on the chart) a very small formation but one which is very clearly delineated. The separating decline for this micro-three peaks ended at the May 20 low and the Dow should not be on its way to new highs. This is one reason why I think point 27 of the minor and point 23 of the mini formation still lies ahead of us.

So my Lindsay analysis says that the market should continue upward but that an important top can be expected in July.
Posted by Carl Futia at 12:33 PM No comments: