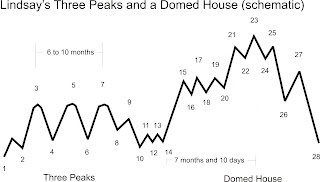 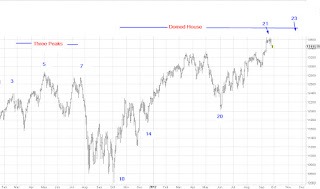 I'd like to update the status of the Dow industrials within George Linday's Three Peaks and a Domed House formation. At the top of this post is a schematic which depicts the typical example while the daily bar chart of the Dow below the schematic is labeled to show some of the key turning points as I see them.

Before going further I have to admit that I expect this  example of the 3PDH to fail in that I think this bull market has much further to go. Any drop from a clearly identified point 23 is likely to stop well above the normal target represented by point 10. But I know that many people disagree with me and I have to admit that so far the market's action is fitting the schematic very well.

My interpretation right now is that point 21 occurred at the September 14 high and that in all likelihood point 22 was yesterday's low. The market is now likely to rally to point 23 which I expect to develop during the October 10-15 time frame if this is indeed a domed house (point 23 on the chart is much later than I expect - the label was put there to make the labeling more readable). The top should not be too far above point 21 which was roughly 13650. So point 23 might occur in the 13800-14000 range.

It is possible that point 21 is still ahead of us and this would extend the life of the domed house  - I don't think this is likely.

Once possible scenario for a failed (or only partially successful) formation which is more consistent with my bull market prognosis would be a drop from point 23 only to the point 20 low or a little lower.

Carl, you are correct that the 3PDH model will fail to materialize. There's a couple of key reasons, too many people right now think the market will crash in the next year. Actually 70% of major investment houses think this way I read on CNBC yesterday. With this kind of pessimism you can't have a bear market. The bears will have their turn in a few years but first we need optimism and exuberance to develop, we aren't there. Second the market is flushed with cash from the ECB and Fed. Third, mutual funds and large institutional investors are sitting on piles of cash, a whopping 50% cash I read on CNBC yesterday. The conditions for a bear market simply aren't there when people are already sitting on cash, they've got nothing to sell, once that cash gets put to work and pensions funds and mutual funds are highly leverage then let's talk about a bear market. But right now none of the conditions that characterize the beginning of a bear market are in place (irrational exuberance, interest rate hikes, highly leveraged investors in the stock market)

OK, here's the link to the article that backs up what I have written in my previous post http://www.theglobeandmail.com/globe-investor/investment-ideas/top-investors-expect-financial-tsunami-in-next-year-survey/article4569722/

Rampant fear among the big investors, add to this that the retail investor is not paricipating in the stock rally. Simply put a bear market is years away, the conditions just aren't there. Markets love to go up when investors are negative, whether it's Europe or the US fiscal cliff, or a China hard landing, or the collapse of the euro currency there's nothing but negative news in the headlines. Bull markets love this kind of environment.

All good points. Do you have a link to the 50 percent cash position by large institutional investors? When I searched for mutual fund cash position, I get something like 3 percent cash, very low, and that has coincided with market tops in the past.

the above mentioned 50% cash postion is not correct.
There are > 3000 MF (not hedgies!)out there - big and small - many with different benchmarks but as of 9/2012 you are looking at a range of 3-6%. I expect over the next 2 years neither a bull nor a bear market but sideways - sorry bulls !

prima canyon and Brutus I provided the link on my second post http://www.theglobeandmail.com/globe-investor/investment-ideas/top-investors-expect-financial-tsunami-in-next-year-survey/article4569722/

It says 40% cash instead of 50% as I wrote, but it also mentions that historical averages have been 5%. So there's plenty of cash on the sidelines right now.

"At a glance: Waking up?
The sweet lullaby of free and unlimited central bank money seems to lose
its slumberous effect as market participants are being woken up to reality
by the noise in the streets from protesting Greeks and Spaniards. That said,
the moment of truth seems to come ever closer when markets will need
more than just free money to keep the still prevailing up-trends intact."

I beg to differ with those who think things are too pessimistic for a bear market. I've been watching a couple Rydex funds for years and years, over a decade, comparing up volume to down volume, I won't say which fund or funds are the most important, but I can tell you that on the very day we had the high last week, we had the highest ever money on the up side versus the down side, almost 12 times. Compared to where the high at the 2007 high at was at 2.7 times, which you saw what that led to. I think we're there, point 23, with all the money on the positive side that this thing needs to play out. Maybe one more time up as Carl is saying. You may hear about a lot of negative stuff, but that's not what the money is saying.

I have the view that we triple top in the market, this would mean 1580 give or take 20 points in SPX, then we are in for a nasty move down.