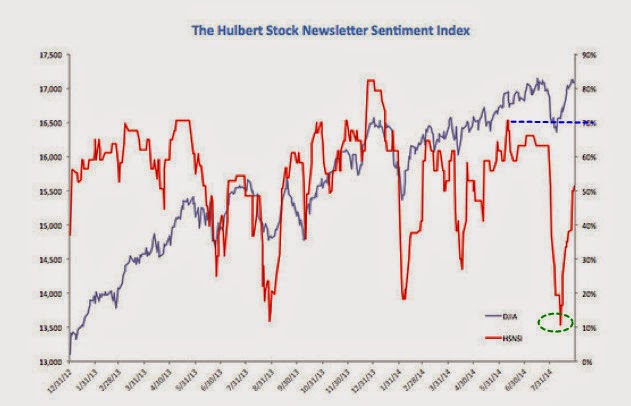 Here are charts of my favorite trend indicators for the US stock market.

The top chart shows the Stoxx index of widely held European stocks. You can see it is visibly above its 50 day moving average (green line) which itself seems to be saucering out prior to turning upward, a bullish configuration. The European index is especially important now that the European Central Bank this morning announced its own program of quantitative easing. This is a policy change with very bullish implications for European stocks and for stock markets world wide. It gives me confidence that the Stoxx index will hold above its 200 day moving average (red line) and remain in a long term bullish trend for the foreseeable future.

The next three charts show my trend indicators for the US market. All are visibly above their 50 day moving averages which themselves are moving higher. This is a strong bullish configuration. I think the S&P will reach 2080 and the Dow 17750 during the next month or two.

The bottom two charts show short term market sentiment in the US (red lines). The bottom chart records Mark Hulbert's bullish sentiment index for stock market timers (courtesy of Hulbert and Market Watch). You can see that at the August low this index recorded the lowest level of bullish sentiment in nearly two years. Since then sentiment has gradually turned more bullish. But before we see an important top in the market I think this index will surpass is summer high (blue line) and maybe reach its 2014 high.

You can see a similar picture in the chart above that of Hulbert's sentiment index. This records the 5 day moving average of the CBOT equity put-call index. Unlike Hulbert's' index, high values of this put-call number show relatively bearish sentiment while low values show bullish sentiment. Before the current up trend in the US averages ends I expect to see this moving average near its 2014 low point.

I don't have anything new to say about the 5 individual stocks I have been commenting on during the past few months. I now think Visa has made its bull market top but the others I expect to establish new  historical highs.
Posted by Carl Futia at 11:58 AM