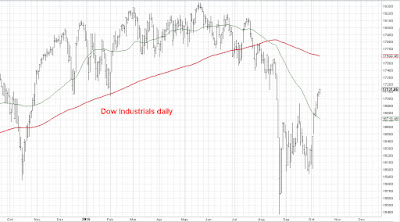 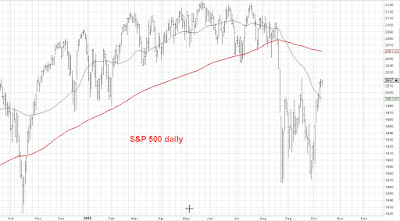 The US stock market is now in an interesting position, one which illustrates how a mechanical reading of trend indicators may not reflect the market's underlying technical condition.

My three favorite trend indicators are displayed at the top of this post. The most important thing to notice is that all three show declining 200 day moving averages (red lines), normally a bearish indication. The Dow and the S&P are still well below their 200 day averages while the NYSE advance-decline line has rallied back to its 200 day average. In addition all three indicators are above their 50 day moving averages (green lines). In a bear market rallies typically end with the averages in the zone between the 50 and and the 200 day average, the zone in which all three indicators are currently found. If you think a bear market is underway in the US then this would be the time to sell stocks.

But is this a bear market ? At their August lows the Dow and the S&P had dropped about 15% from their bull market highs. Most of this decline occurred in a very short, three day period. At the time I said that the market's action reminded me very much of its action in 2011. Then as now the averages went sideways for several months, then dropped violently out of the trading range but quickly reached their lows and then traded sideways in wide swings for several months. In 2011 this wide swinging trading range was followed by a doubling of the averages during the subsequent three years.My own view is that something similar will happen now.

One reason for my bullish view is that the expansive monetary policies of the Bank of Japan, the European Central Bank, and the Bank of China are making significant additions to world liquidity. This is putting upward pressure on all asset markets. Moreover, I think the market turmoil of the past months is a shot across the bow of the Fed, warning it not to raise rates any time soon. So world monetary conditions are still favorable to world wide bull markets in stocks.

Looking at the technical condition of the US market I still see a substantial amount of bearish sentiment. This shows up in the 5 day moving average of the  CBOE equity put-call ratio. At the August lows this ratio reached the highest level in more than three years, showing a corresponding level a extreme bearishness by short term traders. This moving average is coming down now but is still very high relative to its historical norms. I think this bearish sentiment is providing a strong "wall of worry" which will support an extended advance in the averages.

Another technical plus is the recent high in the 10 day moving average of the daily count of advancing issues on the New York Stock Exchange (bottom chart). This indicator has reached the highest level it has seen in nearly two years. Such unusually high reading typically accompany the "kick-off" phase of a very extensive advance.

For these reasons I doubt very much that the US stock market will drop below its August lows any time soon. Instead I think the May 2015 highs will be exceeded during the coming months.