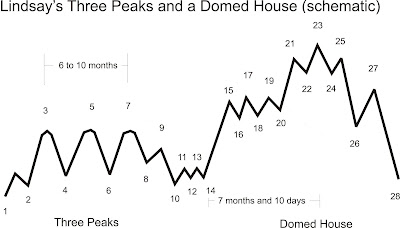 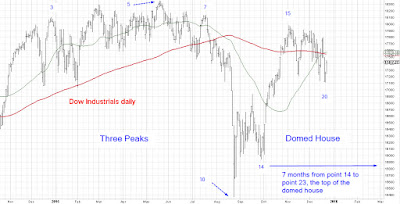 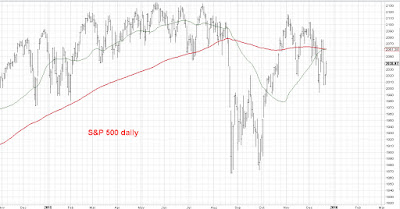 The top chart is a schematic of George Lindsay's three peaks and a domed house formation and below it is a daily chart of the Dow labeled to show its correspondence with the schematic, The bottom two charts show the cash S&P 500 and the NYSE advance-decline line which, together with the Dow, are my principal stock market trend indicators.

Weakness in the AD line like this is not necessarily bearish for the near term but unless the AD line strengthens substantially it is giving reason for doubting the longevity of the current bull market which has lasted more than 6 years already.

The most bullish prognosis is associated with the apparent three peaks and a domed house (3PDH)  which is developing in the Dow. The August low was point 10 while point 14 developed in late September. Lindsay's rule of thumb was that point 23, the top of the domed house which frequently is the bull market top, generally occurs a little more than 7 months after point 14. In the current example this projects point 23 for early May 2016.

I have labeled the Dow chart so as to show the possibility that point 20, the last low prior to the advance to point 23, is in place. But I suspect that there will be more sideways action before the May 2015 top is exceeded and I expect to have to move point 20 as this sideways action continues.

The most striking aspect of this example of Lindsay's 3PDH is that most of the market's time has been spent trading sideways instead of moving up and down. This is a defining characteristic of the formation. It is something that was lacking is other examples of the formation which I thought had developed during this bull market but which subsequently failed.

The bottom line is that the US stock market is likely to continue its bull market into 2016 with the possibility of a bull market top in May 2016.
Posted by Carl Futia at 10:18 AM