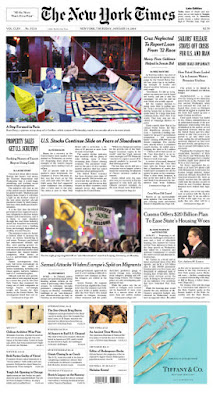 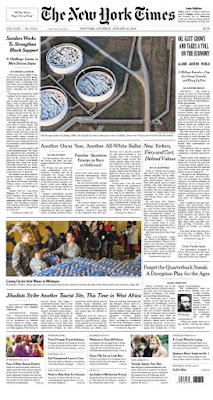 The top three charts are daily charts recording the activity in my three favorite trend indicators. In all three cases the indicator is well below a declining 200 day moving average - a typical bear market configuration.

I do think we are in a mini-bear market. My best guess is that when the smoke clears the Dow and the S&P 500 will be off about 20% from their 2015 tops. But even if I am right about this I think the near-term course for the averages is upward from today's low. I expect a rally of 5-7%  followed by a subsequent decline to the ultimate bear market low points.

As I write this the S&P has broken below its October 2014 low at 1813 (basis nearby futures contract) and has now started to rally. The drop from the November 3 top has pretty much matched the size of both the September-October 2014 decline and of the May-August 2015 drop. Moreover, as you can see the 5 day moving average of CBOT put-call ratio is higher than its been since the bear market low in 2009. These observations are good reasons to expect a strong rally from current levels.

The bearish sentiment indicated by the put-call numbers was manifest in the front page of the New York Times last week. There was first a headline about the bearish implications of the crash in oil prices. There followed a couple of days later an above-the-fold story about the stock market drop world-wide.

The drop from the December 29 top in the averages has been extreme and relentless. The consequent build-up of bearish sentiment will probably fuel a strong rally but one unlikely to retrace as much as half the drop seen so far. After this rally is complete I expect the averages to resume their drops to levels about 20% below their 2015 highs.
Posted by Carl Futia at 2:00 PM