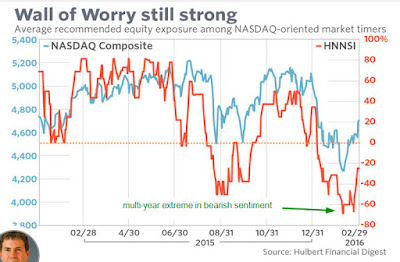 On Friday, and for the first time in 2016, my three main trend indicators (top three charts) all closed above their 200 day moving averages. This is a tentative bull market signal. Jumping the gun a bit I turned longer term bullish early in March after the S&P 500 index retraced more than half of the drop from last year's top.

Sellers are often attracted to a rally back to the 200 day moving average and my guess is that the present occasion will be no exception. Still, the market is likely to make a higher low after the sellers have finished their work and then continue up to and above the 2015 high points.

One reason for my bullishness is the extremely bearish sentiment visible at the January - February low points. The 5 day moving average of the CBOE equity put-call ratio then  reached the highest levels seen since the 2009 bear market low 7 years ago. Mark Hulbert had recently observed that his sentiment index of NASDAQ market timers hit multi-year bearish extremes at its February low. Before any important market top develops I expect to see both of these sentiment gauges show much more bullish sentiment that is visible now.

Another bullish factor supporting stock prices world-wide is the commitment to ongoing QE programs by the European Central Bank and the Bank of Japan. The Bank of China has also been easing its monetary policy lately. I don't believe the Fed will be raising interest rates any more this year, largely because of the scary market conditions of the last three months. So overall central bank policies remain friendly towards stock prices.

My best guess is that the lows of January-February 2016 are comparable to those of August-October 2011. During the subsequent four years the S&P 500 doubled in price. This time around I think a 50% increase from the 1800 low point over the next two years is a reasonable expectation.
Posted by Carl Futia at 8:55 AM