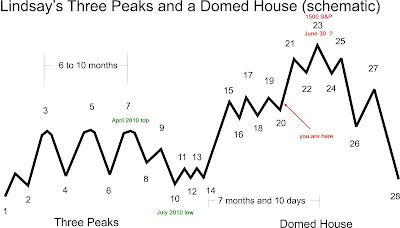 I think the seven month, 10 day period timed point 19 and that point 20 occurred at yesterday's low. The market is now headed up to the dome of the domed house. This generally takes the form of a distorted head and shoulders pattern.

Thanks Carl fot all your analysis..Janet

A very bold call indeed...this is the era for expecting the unexpected...

The wall of worry is so huge and psychology out there is so negative that this may be the (good) surprise this nation could use.

If there is QE3 oil is 150+ Without QE3 the pump stops. Cashed in all my chips except gold silver and will wait until its resolved

1500 spx would be the short of a lifetime

Right now there's pessimism all over. This a gutsy call. It makes sense from a contrarian perspective. That said,greek bonds are now yielding 20% (they are pricing a 60% probabilibyt of default), portuguese bonds reached a record yield overnight of 9%. If Greece defaults it'll cause a $150 billion dollar loss to european banks holding this debt. I read earlier today on CNBC that the european can't afford a default, they are still too weak. If we add to this that profits have disappointed to the downside so far this quarter, and if this continues next week, we may see in my opinion a correction up to 10% from current levels. The fact that the market has not sold off in this environment, is the only reason why I believe Carl's projection of S&P 1500 may materialize, despite the awful fundamentals in the market right now.

As usual you are the man!

Thanks for the 3 peaks and the doom.

Have a good day ~


Markets are peaked as you can see at the distance showing the peak in April.

Hopefully, we will resume the Wave III now.

s&P500 going up another 15% in just 2 month?! The volatility index doesn't suggest that (it's already quite low and it cannot go much lower). Until now at the beginning of all major upside moves, vix has been higher (not like now that is touching the 2-year minimum).

great posts as usual carl. Vix cannot go lower?? things that cannot go lower(higher) always do - will come back when vix below 10, even 8 - all the news is negative and "no good reasons" for market to go higher = mkt will go higher, until the non-believers finally see all of the good reasons it went higher, in hindsight, and then buy because all the news going forward looks great - such action is what creates tops. whoever said there is no such thing as a free lunch - carl is serving it up, free for the taking. good knowledge can be free, it is our failure to recognize it and consume it that can cost us.

Hi Carl
i can see why you favor this as point 20 yet i dont agree at all .
i think yoru call towards 1284 is still a good call and that we are in a minor bounce of the larger point 18 decline . which leaves points 18 to finish and then 19 and 20 still in front of us . as for timing we have may 2nd and june 1 as important swing points
ideally these will be lows . if may 2nd 4th becomes a high ??? it sets up from a timing perspective a much deeper drop into july 1 .
so best set up is we go to 1284 to complete point 18 then chop around in 19 and 20 then start running up strong from june 1 ( point 20 ) and spx roughly 1294-1300 . bottom line more sideways left from what i see.
good luck
joe