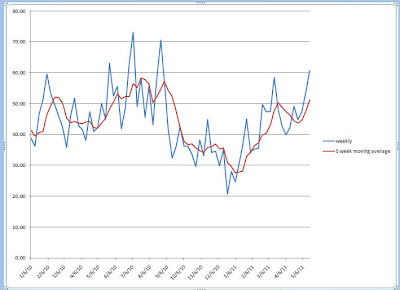 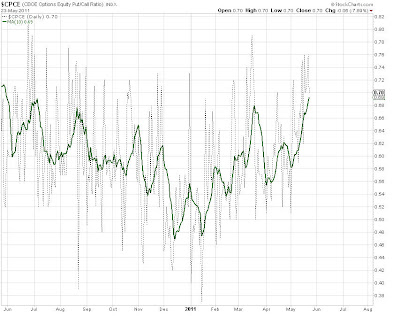 The lower chart is even more striking. It shows the 10 day moving average of the CBOE equity put-call ratio (green line). This moving average is actually higher than it was at the July 2010 low which ended a 17% drop. A lot of people are betting on a continuing decline here!

I think this is evidence of a high level of bearish sentiment in this market. I don't think the bears' wishes will be fulfilled. The S&P will soon start a move to 1400 and above.
Posted by Carl Futia at 11:31 AM

I'm not promoting my blog (I dont sell anything) but click on my profile for the charts showing a msssive rally is likely underway right now.

Hi Carl and thanks for the free blog, not that many around these days. Heres the same cpc chart with longer timeframe and bull/bear zones if anyones interested:
http://min.us/lcBiH8

I'm following those sentiment indicators as well, but in your graph you show only the last past year, which was the most serious rallye ever. If you look back to 2007,2008 you find the current values are not extreme at all...

There of course is another alternative to the bullish / bearish extremes - and that is we continue to do nothing for a long period of time - just like the last 4 months.
1310 on 3 Feb and still there.

Hi Carl
i think you overlooked the 3 peaks domed house pattern i pointed out
the target i have noted is the 1290 price area yet i have focused on 1295 in the cash spx . the time for a low i noted was may 25 june 1 i cant change those dates as of tonight the emini spx has made a swing low so far at 1302.25 and it appears that tomorrow the market will open down as we come into the may 25th date the same target on the emini would be 1293.52 with lower support from 1284.22-1278.81
im focused on the upper target which is 13 points away . the bias would be to look to the long side into june 15th from near tomorrows open targeting a move back up towards 1342-1356 into june 15
then another bear cycle hits which targets a low surrounding july 1 .
if this is a bear market then the july 1 lows would be surrounding 1250 ,,if its bullish ??? then the july 1 low is just a swing low and much much higher targets will be seen.
good luck
joe