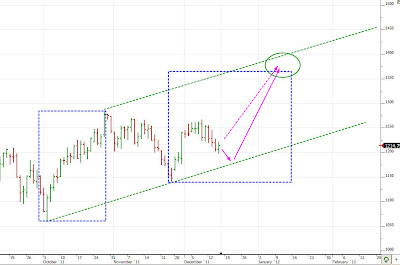 Here is a daily bar chart of the March '12 e-minis.

I think the October 4 low at 1062 and the November 25 low at 1142 are first two lows in a sequence of higher lows. The ES is in the process of dropping to its third higher low which I expect to develop around 1175 at the lower line of the bullish trend channel I have drawn. There is an outside chance that the overnight low last night at 1198 is this third higher low but I doubt it.

In any case the most obvious upside target now stands at the confluence of the upper channel line and the level at which the rally from 1142 will match the size of the rally from 1062 (blue dash rectangles). That is also the level of the May 2011 top at 1373 (green oval).

I think I am on safe ground when I assert that investor sentiment is quite negative. The unrelenting European debt crisis is all people are thinking about and all the markets are focusing upon. Of course, things can always get much worse as we learned in 2008. However, I think that was a very unusual situation and one not likely to be repeated.

What interests me right now is the fact that the ES is well above its October low even as doomsayers are predicting the end of the Euro-currency and a worldwide banking crisis. Moreover, even as the US and European markets are holding well above their September-October lows the Euro-currency itself is below its corresponding low made on October 4. I have a strong suspicion that this means that speculators are expecting the ECB (European Central Bank) to provide ample liquidity to the banking system through the "back door" even as it stands at the front door and denies that it will do any quantitative easing. If it does provide such "back door" liquidity the Euro will continue its decline but European stock markets should recover. This would be a bullish development for the US stock market.
Posted by Carl Futia at 10:57 AM

I wanted to thank you for keeping the good work with your blog. I'm reading it for about 1.5 year and I really enjoy it. Although I have my own trading style and strategy it is always interesting to read your opinion. Thanks for that!

I think I am on safe ground when I assert that investor sentiment is quite negative............

I think that is an understatement but to be a contrarian here requires a short time horizon.
We will have our day !

i think you are pinned to the mat by your prior conclusion that the rally from the oct low was a true breakout rally.

Dear Carl
Ths is the XMAS season now - traditional rally is most likely what is going to happen, but not to new highs. I believe after the first few days of Jan we should then start to see these markets obliterate. Further the extreme volatility that we have been experiencing, in my opinion, normally dictates further falls ahead.

Maybe have a read of my blog and the alternative view:

Hope you are well.
Have a wonderful day.
Kind regards
Isaac Sarayiah

Sorry - apparently the link is wrong in the earlier post. It should be www.theSarayiahpost.com