reaction low in place or nearby 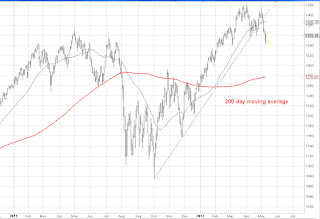 This morning low in the cash S&P (its daily chart is the second one above this post) may well prove to be the end of the drop from the early April top. If it isn't the exact low then the worst I see is another 20 points on the downside. You can see my reasons for this prognosis in the charts above this post all of which you can find updated in real time on my chart page.

The top two charts show the 5 and10 day moving averages of the daily count of the number of advancing issues on the New York Stock Exchange. You can see that both moving averages are above the levels they reached at the April 10 low while the cash S&P is below the level it reached at that low. These are bullish divergences at oversold levels arising at a new reaction low. Such configurations often presage the emergence of strong and sustained rallies. Since I think this is a bull market (the S&P is above its rising 200 day moving average in its daily bar chart above) the conclusion is that the market will soon head above the level of its April top.

The middle chart shows the running total of  the differences between the numbers of advancing and declining issues each day on the New York Stock Exchange. Note that it too is above the low it reached on April 10 - again a bullish divergence.

Finally I want to point out that the put volume relative to call volume on equities has been rising to the highest levels seen this year. The bottom chart is the five day moving average of this number. While the number may yet go higher as the market goes lower, the fact that it has moved above recent tops and above a descending trend line is a warning that an important low is near.

Good job Carl. I picked up something new to follow. How convenient the $spx to bounce off it's 100ma Tuesday.