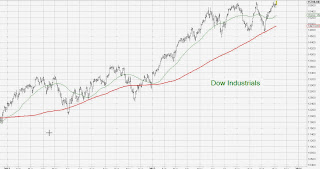 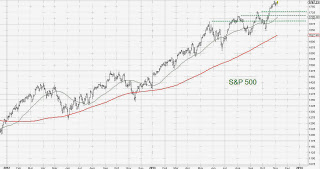 Here are the three daily bar charts I use to keep track of the current bull market trend.

The Dow has made a new bull market high by just a little bit as is consistent with the behavior of the domed house portion of Lindsay's three peaks and a domed house pattern. But as you can see the Dow has been the weakest of these three averages and I think this means that the bull market is getting close to its top. Remember that Lindsay's 15 year 3 month period from bear market low to bull market top expires at the end of the month in the Dow and  in January for the S&P 500. Moreover, the basic advance from the October 2011 low is getting long in the tooth although it could conceivably  continue until June of 2014.

I think there is a lot of short term bullish sentiment in the market. Moreover the bullish Time Magazine cover appeared just one month ago and according to Paul Montgomery's magazine cover indicator the contrary opinion (hence bearish) implications of this cover should kick in right about now.

The bottom line is that while the trend indicators visible in the charts above are still bullish, the odds of a sudden drop back to support (green lines in the S&P chart) are getting shorter. Still, such a reaction need not prove fatal to the bull market trend. We will just have to watch the market's subsequent behavior relative to its moving averages to draw a more solid conclusion.

One more observation: the market configuration you see in the charts above always appears at a bull market top or at a temporary bull market high. In other words, the market always looks great at what subsequently proves to be the top, and it always looks terrible at the bottom of an important swing. So one must constantly be looking for hidden clues to the turn of the trend in these situations. Right now these clues arise from the underperformance of the Dow, from Lindsay's long term timing methods, and from excessive short term bullish opinion and the Time Magazine cover indicator.
Posted by Carl Futia at 12:14 PM

Thanks again Carl for your updates. I have found your insights to be one of the best i follow. As an aside, I remember a post back in August 2009 "Hollywood Horror" and i mention that because this past week an article about Amazon which used the most up-to date views of its customers what new pilot shows were most popular . Everyone was a comedy or animation .. Thanks again, Michael