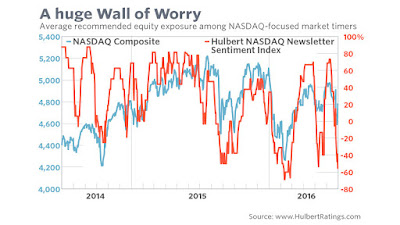 Two weeks ago the U.S. stock market dropped nearly 7% in two days on news that the British had voted to leave the European Union. Since then I have been reading a torrent of uniformly negative commentary on British economic prospects especially from European and British sources. The Economist magazine is the biggest single offender here. I think this is a classic example of the rapid formation of an bearish investment crowd in response to an unwelcome surprising event.

Yet in the face of this avalanche of bearish opinion the Financial Times FTSE index of British stocks is acting very bullishly. Both the index itself and its 50 day moving average are above the 200 day moving average and all three measures of British stock prices are rising. Chart readers will also note the obvious bullish breakout from a head-and-shoulders base formation.

Right now the message of the market is: buy Britain and sell Europe - exactly the opposite of what the crowd is urging you to do.

The Brexit news also had a big effect on U.S. market sentiment. The top chart comes courtesy of Mark Hulbert. It shows that Hulbert's survey of NASDAQ market timers reveals as many bears as there were at the February 2016 low which in turn was a level of bearishness not seen since the 2009 bear market low. As Hulbert observes this is a formidable wall of worry, one high enough to support a substantial advance.

Just below Hulbert's chart you will see charts of my three main trend indicators for the US market. All three are unambiguously bullish.

The bottom line is that US stock prices are likely to advance substantially above current levels. The swing up from the February low to the pre-Brexit high carried prices up about 17% so I think it is reasonable to expect an advance of about 15 % above the Brexit low and so far the US markets have done only half that.

Stepping back from the immediate situation for a moment I think that world stock markets are telling us about the efficacy of the QE policies followed by central banks. They are saying the Fed  and the Bank of England have done better than other central banks in sustaining their respective economies. The big drop in the pound is evidence that the market thinks the Bank of England will continue to support the British economy.

On the other hand the report card the market has written for the European Central Bank is definitely unfavorable. European stock markets have been uniformly weak and the Euro currency has been basically stable against the dollar instead of dropping as it would if ECB quantitative easing policies were credible and effective. Here I think the looming Italian constitutional referendum is a big worry - a rejection of reform  in the October vote could easily trigger a banking crisis in Italy and Europe. At some point events in Europe will force the EU's hand and I think the only thing which will save the union from breaking up is a sensible monetary policy by the ECB. But how bad will things have to get before Germany understands it is strangling the EU by demanding a tight monetary policy?

The Bank of Japan's policy has received an unambiguous "F" from the markets. Not only is the yen rallying against the dollar (up 25% so far) but the Japanese stock  market has been dropping with no sign of a turn-around. The market has completely lost confidence in the JCB's commitment to maintain a steady growth in nominal gross domestic product and at the moment I don't see how confidence can be restored. Until it its the yen will continue to rally against the dollar and the Japanese stock market will remain in a bearish mode.