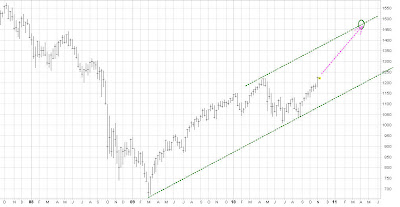 Here is a weekly bar chart of the cash S&P 500. Last week the market reached new highs for the bull market which began from the 666 level in March of 2009. I have drawn a parallel trend channel which I think has a good chance of encompassing this new bull market up leg.

In this previous post I explained how Lindsay's three peaks and a domed house formation predicted a top for early April, 2011. I have drawn a green oval at the top of the trend channel centered on the early April target date. This target zone is roughly the 1450 level. Such an advance would be a 25% rally from current levels and a 45% move up from the July 2010 low. That is where I think this market is headed.
Posted by Carl Futia at 12:36 PM