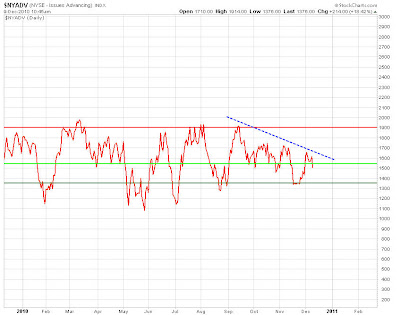 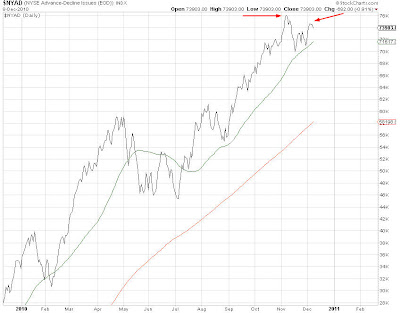 Here are two charts which are conveying an important message. The bottom chart shows the cumulative total of the difference between the number of advancing and the number of declining issues traded on the New York Stock Exchange each day. The top chart shows my favorite oscillator, the 10 day moving average of advancing issues.

Both these indicators warn of impending weakness in the averages. The cumulative advance-decline line is still visibly below its November 8 top while the S&P 500 is visibly above that same top. This is a real change in behavior because the advance-decline line has generally been much stronger than the averages during the past 18 months. This bearish divergence between the AD line and the S&P tells me that the market will soon drop 50-75 points before the bull market can resume.

The top chart of the 10 day moving average of advancing issues shows a series of bearish divergences going back to early September. This is again a bearish message.

Normally, divergences like these don't worry me too much. But the market is trading near 1250 resistance (the March 2008 low on the Bear Stearns failure) and has advanced with little corrective activity for nearly 4 months to a new bull market high.

basically I m expecting a new very fast ascent with fast new highs around 1313 pts in the standard S&P before a much larger drop to around 1044. Cheers. MC

Ron whether the market reaches 1250 or not it's still not worth it when the downside potential exceeds the upside.

Bill, my question was to determine positions, either start short now or wait till 1250 area. With short ETF's decay can kill you with 15-2 points. So... either get out of shorts now, take your medicine and wait with short position initiated, or wait till 1250 area and start a short position. If 1250 hits prior to drop, the smart move is to wait, thus the question of Carl.

that is why you scale into your shorts. You can never time the top and if you don't get in before the drop, you never will.

Enormously high sentiment across the board (AAII, II, put-call ratio) plus many unfilled gaps, low volume, reversals again on the HUI shares, a bad Chines stock market makes this move down not just a light retreat. Bombs away when it finally breaks.

What? No Santa-rally? But I need my Red Ryder BB gun.