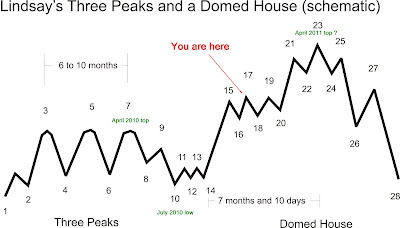 As you know I think the stock market's action during the past year has been following George Lindsay's Three Peaks and a Domed House pattern. I last commented on this phenomenon in this post.

Above you will see a schematic of the typical three peaks and a domed house pattern. I think the April 2010 top in the Dow was point 7, the third peak. The July 2010 low was point 10, the bottom of the reaction which separates the three peaks from the domed house. Point 14 was the August 25, 2010 low. The importance of point 14 is that in a typical formation the top of the domed house, point 23, develops about 7 months and 10 days after point 14. This projects a top in early April, 2011.

At the moment I think the market is in the midst of the "five reversals" part of the domed house, points 16-20. This is typically an extended trading range with a slight upward slope. I am guessing that the early November top was point 15, the November 16 low was point 16, and that a top is developing now which will be point 17.

My best guess is that point 23 will develop near or above the Dow 12000 and the S&P 1300 levels. If this is a classic 3PDH formation then the subsequent drop will be a full fledged bear market, but should only carry down to the start of the whole formation. This would take both averages a little below their July 2010 lows, a drop of 30% or so and will probably last about 8 months.
Posted by Carl Futia at 10:51 AM

Although I have to admit that it is hard to believe there will be a bear market next year, only two years after one of the biggest bear markets in history. I wouold think it'll take at least 5 more years before we see another bear market.

Normally I'd say this is not possible, but from a contrarian perspective with all financial powerhouses predicting a bull market next year, you might prove to be the market oracle for next year.

what happens after the formation has been completed? does it start over again?

I'll continue to follow this blog for this update alone. I'm relatively new to trading stocks and investing, but it seems possible with this market, even though the 3rd year of the presidency tends to be the most bullish year.

I see you got apple (APPL) support pegged at 265 at what point will you raise it?

Dear Carl,
Many thanks for your prompt answers(updating the three peaks and a domed house)...We apreciate it alot.
Best Regards
Raed