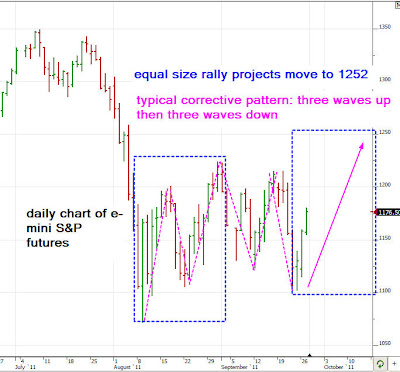 The rally from last week's 1102 low started after the break below the August 22 low at 1105 in the December e-minis did not result in further selling. The fact that the market has rallied swiftly back above not only that low but above three intervening lows shows that it is rejecting prices below the 1130 level. The midpoint of the drop from the August 31 top at 1223.75 to last week's 1102 low is 1163 and the rally has taken out this resistance level also.

These considerations all point to an ongoing rally which will probably equal the length of the August rally which was 152 points (blue dash rectangles). This suggests an upside target 1254 for the move up from 1102.

Despite the short term bullish implications I draw from the past couple of days activity I still think stock prices are in a bear market which will eventually carry the S&P down to 950. The only development which could alter the situation would be a dramatic shift in Federal Reserve policy to another round of quantitative easing. Failing this we should see the 950 level during the first quarter of 2012.
Posted by Carl Futia at 11:57 AM

Carl, thank you very much for the comment and update..thought another round of QE is a given , only the timing is uncertain. fed has already said whatever it takes it will do as far as QE is concerned.

Carl, have you ever in your career been whip-sawed like this? Reminds me of a dead fish flopping around the bottom of the boat.

What ever happens, there is a big move coming up in either direction over next couple months.... we should know soon enough. I agree, if we rally in EOY then its a sell because I cannot see the FED easing further with a equities rally.

the chart can be looked at a pattern where 1220 is the top and the bottom is 1100 or so.. it is range bound ..and the upside is faster than downside ..

I think it is really very kind of you to give out so generously your expert view which have many times be proven right (because of your extensive experience in the market).

For those who read Carl's blog for free, I believe in life we should NOT just be takers.