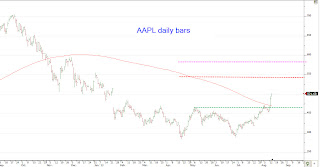 Here is a daily bar chart of Apple Computer covering the past year's price action. During that time AAPL's price was cut nearly in half from 705 to 385.

Yesterday Carl Icahn announced that he had taken a position in AAPL and thought it was undervalued. This news produced an upside breakout from a sideways trading range which had formed below 460 (green dash line). It also pushed AAPL visibly above its declining 200 day moving average (solid red line).

This looks like a genuine upside breakout to me. The conservative upside target I see would be 540-45. The midpoint of the bear market drop stands at 545 (dash red line) while a move up from 385 which doubles the initial leg up from 385 to 460 would end at 540. A slightly more optimistic upside target would be 582, the .618 retracement of the bear market (purple line).

What are the odds that AAPL will return to its bull market high at 705? At this juncture I don't have an opinion about this. The real test of AAPL's technical condition will come on the next sizable break in the general market of 10% or more. If AAPL can hold above the 460 support level on such a break it would be showing a very strong technical condition and much higher prices would then be indicated.