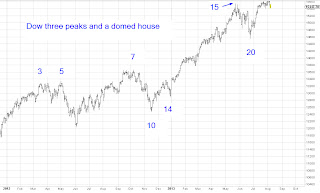 Lindsay expert Ed Carlson has identified an example of George Lindsay's three peaks and a domed house formation which I missed. Here is the link to his commentary. Thanks to blog reader John Doe for bringing this to my attention.

This 3PDH is currently in the process of forming the dome of the domed house - points 21-25 in the schematic you can find here. This particular 3PDH formation is unusual in two respects.

First of all, point 10 does not fall below both points 4 and 6 as it typically does. Instead it only falls below point 4. Lindsay required that point 10 be lower than one of points 4 or 6 but not necessarily below both so this formation qualifies by his criterion.

But in all other respects this is a legitimate 3PDH. In particular 6 months separate points 3 and 7, making this a major formation. Moreover, the 7 month, 10 day count from point 14 on December 28 ends on August7. In principle this should mean that point 23, the top of the domed house, occurred on August 2-5 and that the market is now on its way to or below point 10.

As you know I have been thinking it terms of a bull market top this fall or early in 2014 because that is when Lindsay's 15 year time period from the 1998 bear market low to a prospective bull market top expires. In addition the basic advance which began from the October 4, 2011 low seems more likely to end in October or later than in August of this year.

One way these two forecasts could be reconciled would be for point 27 of the domed house to be above point 23. This does happen occasionally but is not typical. We will just have to see how things develop. I will say that I don't see the sort of technical weakness right now which would lead me to expect a drop in the Dow right now of as much as 400 points from its recent top.

Yes, I think it's just a summer retreat then rise into 2014

Another update from Ed Carlson:

Expanding on the Work of George Lindsay

This is an unusual version of 3PDh which Lindsay called "Model 3". It also occurred in 1951-1952 and is explained on pg. 84 of my book "George Lindsay and the Art of Technical Analysis".

Anyone should feel free to contact me through my website (Seattle Technical Advisors.com) and I am happy to email you the September Lindsay Report.