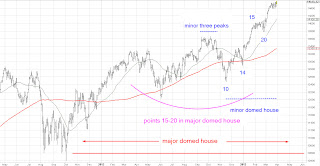 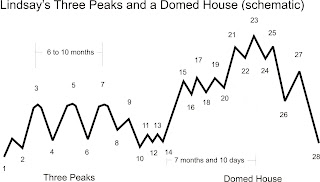 For about 18 months now I have been interpreting the market's movements as a major example of a three peaks and a domed house. The three peaks occurred in January -June of 2011 and point 10 in this major formation was the October 2011 low. Since then I think the market has been evolving in a domed house formation.

I think the top of the current rally will also produce point 23 of the minor domed house formation as well. In fact if you look carefully at the chart of the Dow you can see that the past two weeks price action may well have begun the construction of the dome, points 21-25 of the minor formation. It is too early to be very sure about this. But I think there is enough evidence to justify cutting back on long term investment positions.

It is important to remember that even if point 23 of the major formation is at hand the market can well stall and go essentially sideways for quite a while before a substantial bear market starts. A Lindsay basic advance began from the October 2011 low and these typically last 2 years. The 15 year time period from bear market low to bull market high counted from the 1998 low projects a top for late this year or early next. My best guess now is that these two measurements are predicting point 27 of the major formation which may well be a new bull market high late this year or early next.

I have been thinking that the May 2012, September 2012, and upcoming April (?) 2013 top might well be another example of a major three peaks. This is still a possibility but I think it is increasingly unlikely in the Dow. The third peak will be well above the preceding two peaks, an unusual although not unprecedented situation. However you can see that in the middle chart of the QQQ the three peaks are all at about the same level, the classical picture of three peaks.

If another three peaks is developing then the subsequent drop to point 10 of the new formation has to take out one of the two lows which separate the peaks from one another. This would require a drop below the November 2012 low. Such a break would then be followed by a move to new bull market highs. Since that move to new highs typically lasts 7 months or so one would expect the final bull market top (point 27 of the well established major domed house and point 23 of the new, yet to begin, domed house) to occur late this year or more likely early next year.

How does the SPX-500 stack up with this chart pattern, or the NYSE

Several weeks ago you posted a chart of the NYSE A/D line and said that we were still a fairly large amount of NET ADVANCES away from matching the previous upleg in the market.

Can you revisit this indicator?
We must be getting awfully close.

Will point 27 of the new bull surpass point 23? It doesn't look like that on the charts. Why do you call it a new bull market high?

An update from Ed Carlson: