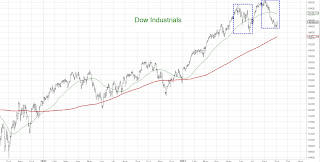 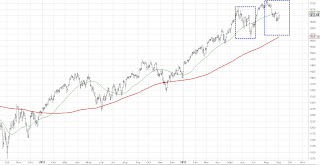 Since August 2 the Dow, the S&P 500, and the New York Stock exchange advance-decline line have all been moving lower.

The Dow has been the weakest of the three and has dropped about as far as it did during the May- June decline. As you can see the Dow is trading well below its 50 day moving average which itself has turned lower.

The S&P (second chart from the top) has been the strongest of the three and its drop from the August 2 top so far has been 50 points shy of the size of the May-June drop. The S&P is trading below its 50 day moving average but not far below it and that moving average is still trending higher.

The advance-decline line (third chart from the top) showed weakness at the August top by not managing to move above its May high. Since then it has dropped more than the S&P but less than the  Dow in relative terms. It too is below its 50 day moving average which currently is moving sideways.

The drop during the past five weeks has been very moderate and bursts of selling have not seemed to encourage further selling on subsequent days. The entire picture so far looks more like a correction with an ongoing bull market instead of the first leg down in a bear market.

The one thing which makes me think that this reaction is not over yet is the behavior of the 5 day moving average of the CBOE equity put-call ratio (bottom chart). You can see that this indicator has been trending downward (showing increasing bullish sentiment) from the peak it reached at the June 2013 low point. Normally I would expect to see this moving average break above the declining trend line I have drawn at or near the reaction low.

Hi Carl,
Great information thank you. I was just wondering how you think Apple affects the Nadaq and S&P charts. It seems like it is hard to get back to the June 22nd lows with Apple up 100 points, given it's weighting.