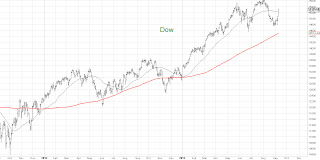 Here are five charts which I think give a pretty good indication of the current trend of the market but warn of dangers ahead once this trend reverses.

The top three charts show the S&P 500, the Dow, and the New York Stock Exchange advance-decline line. All three indicators are trading above their 50 day moving averages, with the S&P showing the strongest action and the advance-decline line the weakest. So for the time being the trend of the US stock market is upward. A rally from the August 26 low which matches the size of the 152 point rally from the June 24 low would put the S&P at 1780 and this is the most conservative upside target I can calculate.

The chart at the bottom shows the 20 day moving average of NYSE 12 month new highs. Even if the S&P reaches 1780 it seems likely that this moving average won't even make it back to its August top, let alone its May top, on the current rally. If this is the right guess then this indicator will be continuing it bearish divergence which began at the May 2013 top. This sort of divergence is generally seen only at bull market tops.

The chart above the new highs chart shows the 5 day moving average of the CBOE equity put-call ratio. This is the most bearish of the 5 charts since it shows the ratio's moving average at the lowest point in 2 years, i.e. it shows the most bullish sentiment of the past 2 years. This chart will have very bearish implications if the three market indices in the top 3 charts should all slide back below their respective 50 day moving averages. If this should happen I will again turn bearish on the short term trend.
Posted by Carl Futia at 9:19 AM

Carl...Stanley Druckenmiller on the markets. He thinks its quite likely there will be a period of no bids in the market when QE is ended. This event will be much much worse than 2008 crisis.
http://www.bloomberg.com/news/2013-09-11/stan-druckenmiller-says-fed-exit-would-be-big-deal-for-markets.html