Quantitative Easing one year on 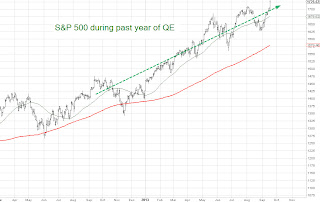 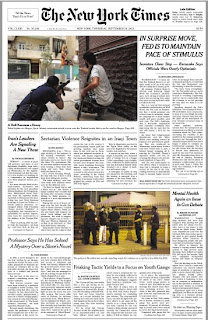 It's been a year since the Fed embarked on its current quantitative easing program in which it adds $85 billion in mortgage securities to its balance sheet each month. The thing which makes this program different from the Fed's previous efforts is that it tied its continuation to the performance of the US economy and vowed to continue its purchases at some level at least until the unemployment rate (then 8.0% and now 7.3%) dropped to 6.5%.

Faster economic growth, the Fed's main goal, is always associated with higher, not lower, interest rates. So despite statements by the Fed that it is trying to lower long term interest rates it's real goal is to raise them by encouraging higher rates of economic growth in the US. The middle chart shows the daily yield on the US treasury 10 year note and you can see that the Fed is achieving this goal also.

All in all I rate the latest QE program a success for the Fed. I expect it to continue at least until the unemployment rate drops to 6.5% and until the Fed starts revising its forecasts of US economic growth rates upward instead of downward.

Just what this implies for the future path of US stock prices is a little more problematic. You have to remember that the market moves on surprises and unforeseen developments. So the question now is how much of the effect of the Fed's QE program has been priced into the market.

I think today's headline in the New York times gives us reason to worry that most of the positive effects of QE have been priced in. This headline lines up with the implications of the latest Time magazine cover which I discussed in this post.

Does moving higher to 1775-1800 negate the Lindsay TPDH? I would think in the mean time we would retreat somewhat.

I'd say that it would negate it.

An alternate view on QE - which I currently believe.
Mike O'Rourke at JonesTrading sums up what a lot of traders are feeling right now about the Fed (still easing), the stock market (making new highs) and the economy (seemingly weakening a bit) in one paragraph that will make you uneasy.
Right now, the FOMC has “a tiger by its tail” - it has lost control of monetary policy. The Fed can’t stop buying assets because interest rates will rise and choke the recovery. In short, today’s decision not to taper was driven by unimpressive economic data, the fear of a 3% yield on the 10 year Treasury and gridlock in Washington. If the economy cannot handle a 3% yield on the 10 year, then the S&P 500 should not be north of 1700. It is remarkable that the equity market continued to buy into easy money over economic growth. QE3 has been ongoing for nearly a year and the economy is not strong enough to ease off the accelerator (forget about applying the brake). Simultaneously, the S&P 500 is up 21% year to date and the average share gain in the index is over 25%. Maybe today’s action will turn out to be short covering, but if it was not then paying continually higher prices for equities in a potentially weakening economy is a very dangerous proposition.

I think any useful theory has to make good predictions. The alternative view you offer has been held by Jones for more than a year, a period during which stock prices have risen substantially. I think this tends to discredit that theory.