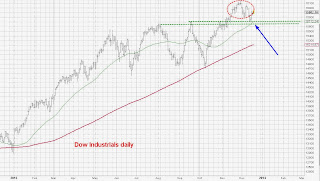 The top chart above this post shows the Dow for the past year. At the October 9 low the Dow kissed its rising 200 day moving average and also made the low of the separating decline in a minor example of George Lindsay's 3 peaks and a domed house pattern. After the low of the separating decline the pattern predicts the development of a dome house formation which takes the average to new highs above the preceding three peaks (in this case the May, August, and September highs).

The top of the domed house often takes the form of a possibly misshapen head and shoulders top (red oval). Last week the Dow dropped below the downward sloping neckline and in my opinion completed the top of the domed house. But the drop put the Dow right on top of two support levels (green lines) as well as just above its 50 day moving average. These support levels have produced a rally which so far has produced a second lower top.

This potentially complete price pattern in the Dow is one reason why I think the US stock market is in a dangerous situation. A drop in the Dow below these support levels will be strong evidence that this average is headed below its October low.

The bottom chart shows Apple's rally from its mid-year low at 385. Remember that AAPL's all time high was 705 so from a longer term perspective AAPL is acting much weaker than the stock market averages. Since the June low however AAPL has kept pace with the broader market.

The rally from 385 has had two distinct up legs each of about 120 points (blue rectangles). AAPL will probably react to the support level represented by the higher green line and to the confluence near 515  of this line with the lower purple rising trend line. A third up leg from there of about 120 points would put AAPL at 635.

On the way up from 385 there have been two reactions, the biggest of about 75 points. A drop bigger than that from the recent high near 577 would mean that the rally from 385 is over and that a drop below 385 is underway.

So does this mean if DOW goes down, usd/jpy will go down too (FEAR)?