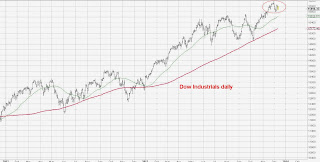 Today's drop in the averages has put the Dow industrials in a precarious position.

As you know I have been following the evolution of a minor example of George Lindsay's three peaks and a domed house formation in the Dow. The domed house portion of this formation began from the October 9 low. Right now a misshapen head and shoulders top appears to be forming (red oval). The dome top of the domed house typically assumes this shape. A Dow close below last week's low would complete this structure and at that juncture I would have to assume that the top of the domed house is in. This in turn would imply that a drop below the October 9 low and possibly below the June 2013 low is underway.Such a drop would put the Dow beneath its 200 day moving average, a definite warning that the nearly five year old bull market is over.

Below the chart of the Dow are charts of three stocks which are widely followed nowadays.

Facebook hit 57.50 in after hours trading following its last earnings announcement, just shy of the 58-60 target zone I cited in my last post on Facebook.  two months ago. Since then FB dropped about 14 points, a bigger drop in points than the drop during the first 6 months of 2013 but smaller in percentage terms. FB dropped nearly two points below support at its post-IPO high at 45 (green dash line) but has since recovered above 50. All in all I see no sign right now that the FB bull market is over but a drop below the November low would change my view on this. Another leg up in FB which matches the size of the 2013 rally from 22 to 57 would put the stock to 78.

I last commented on Visa here.Visa is holding support at the 195 level (green line). The last two drops were 20 and 25 points in length. So even if a similar size drop were to begin now it would only take V back to its rising 200 day moving average. Unless and until that moving average shows signs of rolling over I will stick with my 260-275 upside target.

Twitter has shown a lot of strength since its IPO in early November. The stock dropped only about 11 points from its post IPO high at 50 and has since rallied above 50 in the face of weakness in the general market. As long as TWTR holds above that low at 39 I have to believe it is going higher, probably to 75-78 or three times its IPO price of 26.

NYAD also below its 50 dma again