still an uptrend but getting shaky 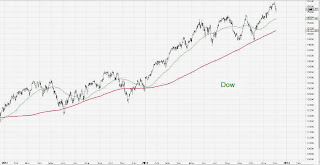 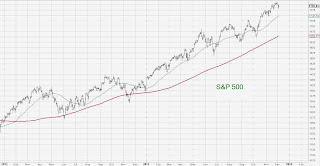 The top two charts you see above this post tell us that the bull market up trend is still intact but the bottom two are warning that it is getting late in the game.

Those of you who are Lindsay fans will recall that there is a minor example of the three peaks and a domed house pattern developing in the Dow. The three peaks are the May, August, and September highs which developed within a 4 month span as opposed to the 6-10 month span required for a major 3PDH pattern. The separating decline ended at point 10, the October 9 low. Since then the Dow has made new highs above the three peaks as required within the domed house part of the pattern. If you look carefully at the Dow's action since mid-November you will see the left shoulder and the head of a potential head and shoulders top with a declining neckline. A (possibly mishapen) H&S top is often associated with the top of the domed house and the past three weeks' action in the Dow are warning that the peak of the domed house may have been seen. Once the domed house is complete the prognosis is for a drop below the level of the October low and probably below the June low as well.

The bottom two charts are warning of an imminent top as well. The NYSE advance-decline line made its high on October 28 and since has been trending lower. This has created a bearish divergence between the AD line and the major stock market averages.This divergence is emphasized by the bottom chart which shows the 10 day moving average of the daily count of advancing issues traded on the NYSE. You can see that this oscillator's December high was very much below its October high, thus creating what I think is a very significant bearish divergence.

These considerations tell us that while the bull market trend is still intact it is hanging by a thread. That thread right now is the position of the 50 day moving average of the Dow. Should the Dow drop below that level I would conclude that the December top is an important one, the top of the domed house in the Dow, and that the averages are headed below their October low points and possibly below their June lows as well.
Posted by Carl Futia at 1:21 PM

Looks like a very likely scenario, agree, hanging by a Fed and headed South sooner than later