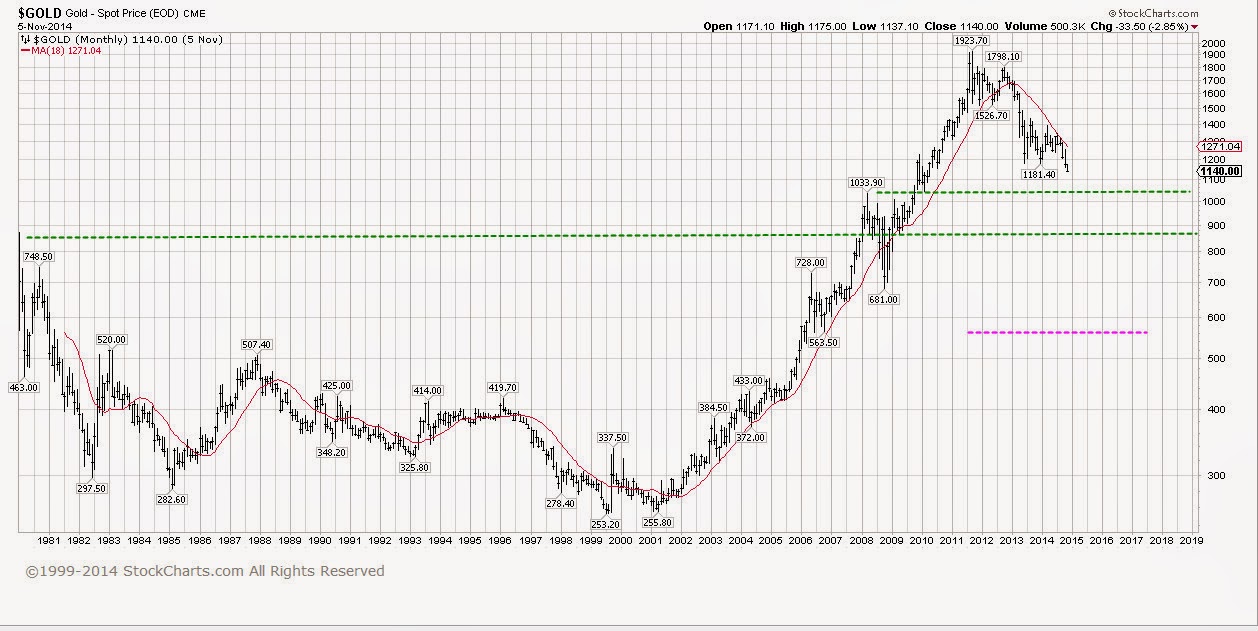 Here are monthly bar charts showing gold and silver futures prices together with the 18 month moving average. I last commented on these markets here.

Before discussing gold and silver I want to make a few remarks about the US stock market. Both the Dow and the S&P have reached new historical highs. I think the QE program of the Bank of Japan and a prospective QE program of the European Central Bank will push global asset prices higher. The Fed will be maintaining the size of its own balance sheet for the foreseeable future so its policy won't counteract the policies of the other two central banks.

I must admit that QE programs have a are having a much bigger stimulative effect on US stock prices than I initially expected. That said one may as well go with the flow until there is an obvious change in policy somewhere. At the very least I think the Dow will rally to 19800 with the S&P moving up to 2160 over the next few months. When and where this extraordinarily long bull market will end is anyone's guess.

I have been bearish on precious metal prices for a couple of years now. I think the 2011 tops in gold and silver are comparable to the January 1980 top in these markets. Then gold futures sold at 874 and silver at 48.00. After the 1980 top both markets dropped for nearly 20 years. A drop to the purple lines visible in each chart would make the percentage drop from the 2011 top in each market as big as the percentage drop which followed the 1980 tops.

I think gold will find support near the 1980 top in the 850-74 range. Silver should find support in the $13-14 range. I don't have much of a feel for the size of the rally one might expect to start from these support levels. In any case I like to use the 18 month moving average as my very long term trend indicator for the precious metals. As long as this moving average is moving lower it is usually best to sell rallies. But once it turns up and prices are trading visibly above the 18 months average a new bull market will probably be underway.
Posted by Carl Futia at 2:17 PM

The charts for gold and silver show a decline from the 2011 top that is clearly five waves rather than three waves, and according to Elliott Wave theory, a five wave decline is the initial leg of a bear market.