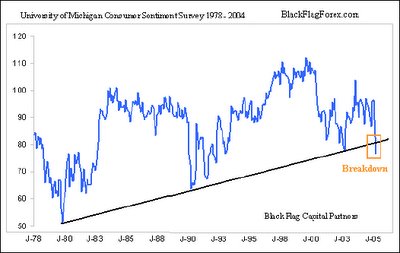 In this regard Bryce Logan has brought my attention to the University of Michigan index of consumer sentiment (thanks Bryce!). The chart above this post comes courtesy of Black Flag Partners and shows this consumer sentiment index for the past 25 years.

You can see that the most recent reading in the index is the lowest in more that 12 years ! The most remarkable thing here is that previous low readings like this typically were associated with a depressed stock market and great economic turmoil.

For example, the sentiment index reached an extreme low in early 1980 when inflation seemed completely out of control and gold reached $850 and silver $40 per ounce. The bond market was crashing and in March 1980 the Dow dropped as low as 729. The Dow has not been that low any time over the subsequent 25 years. And during the 8 months after March 1980 the Dow rose 25% !

We had a similar situation in the fall of 1990. War threatened in Iraq, oil had risen to a record $40 per barrel and the whole savings and loan industry had collapsed amidst fears of a general banking panic. The Dow reached a low of 2360 in October 1990 and then more than tripled over the next 10 years.

Most of you will recall the gloomy situation in the fall of 2002. The S&P had fallen 50% from its 2000 top and the Nasdaq 90%. Corporate accounting scandals were the order of the day and the greatest economic fear was out-of-control deflation as occurred in Japan during the 1990's. In retrospect this was also a great time to buy stocks as the S&P rose more that 60% over the next 30 months.

The folks at Citigroup.FX technicals think that history will repeat itself now. They think a big stock market rally lies dead ahead because consumer sentiment is so depressed. I agree.
Posted by Carl Futia at 9:43 AM