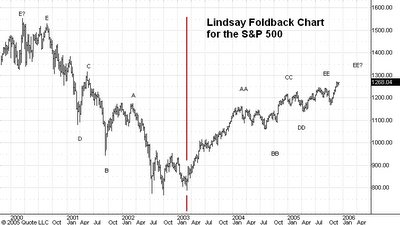 I learned the technique of foldback charts from George Lindsay. I last commented on the chart you see above here. You will also find a description of the foldback idea in that post.

At this juncture I think the market is headed for a top at EE, predicted by the March 2000 top labeled E. The date for this predicted top is March 1, 2006. This is a full 2 months before the prediction generated by the Three Peaks and Domed House which started from the January 2005 top. We'll just have to look for more clues of the impending bull market top as the rally proeceeds into 2006.
Posted by Carl Futia at 10:51 AM