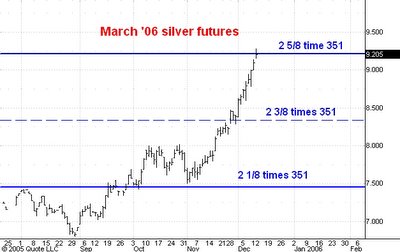 Here is a daily chart of March '06 silver futures.

Back in February 1991 silver established a low of 351 which ended the bear market that started after the infamous Hunt silver corner was broken in January 1980. At the 1980 top silver futures briefly traded above $40!

As I mentioned in a recent gold post, I find it useful to look at multiples of bear market lows when calculating support and resistance levels. The most useful ones are multiples of "1/8" that are not also multiples of "1/4". Of these the most important are the 1/8 and 5/8 multiples.

I think both markets are about to start substantial reactions from current levels.
Posted by Carl Futia at 12:00 PM