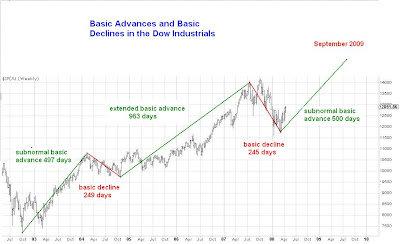 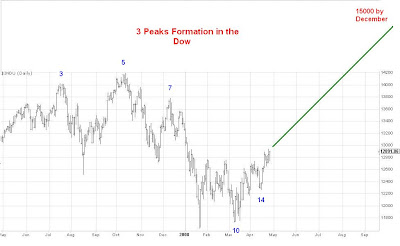 Above this post you will see a daily chart of the Dow Industrials showing my interpretation of an ongoing George Lindsay Three Peaks and a Domed House formation in the Dow. Above this chart you will also find a weekly chart of the Dow showing my interpretation of the market's position within its sequence of Linday's basic advances and declines. I last commented on Lindsay's approach to the market here.

The Dow traced out a clearly defined three peaks extending from July through December 2007. The subsequent separating decline was quite a bit bigger than normally associated with a three peaks formation. I am placing point 10 at the March low rather than at the January low because this placement allows for a clearly defined point 14 in April. The standard time interval from point 14 to the peak of the domed house at point 25 is 7 months and 10 days which would put the top in late November of 2008.

These two projections can be reconciled if the Dow spends about 9 months in an essentially sideways trading area from December 2008 through September 2009. The subsequent basic decline would then be a more extended and substantial drop than we saw from October 2007 through March 2008.
Posted by Carl Futia at 8:15 AM

Very nice analysis and very interesting. I especially like the (horrible) idea of 10 months of sideways movement, followed by a DEEP (years' long?) bear market.

hi carl
just going to keep it simple
i dont agree with your 3 peaks domed house pattern and yet i do agree most of all with your basic advance chart . the problem with your 3 peaks patterns is i dont see point 8 9 or 10 ( i see your labels just dont agree )
good work though ,well see how it plays out very soon . my take is
the final peak comes in early to mid 2010 so we are is basic agreement .
joe

Carl, you've been forecasting S&P at 1410 for the last 6 months now. Are you serious?

Thanks for the insight. I am with Joe, I don't see the pattern playing out with the advance. I see us moving much lower as the advance was made last October.

I appreciate your hard work!!!

I don't follow Lindsay, but your speculative forecast is similar as my EW and cycle analysis for LT view.

Thanks and Good luck

I have been following your changes to you Lindsay posts for a couple of years I think. Based on your changing predictions over this time it does not seem like a useful predictive tool. It may work in hind sight, but if it is not useful in predicting what is the point?

Anonymous says, "Carl, you've been forecasting S&P at 1410 for the last 6 months now. Are you serious?" The S&P has just reached 1400 this morning representing about a 10% increase from the low this year. Looks like Carl is serious... or at least a decent forecaster in this instance.

This morning, I noticed that OPEC is speculating OIL could go up to 200 which is extremely bearish.

This is like economically realistic disaster for majority of americans to say the least. Moreover, it is like invisible economic war again US economy and americans.

Hi, Carl. I believe we're in a quick push up to the final high at about July, as I have thought for many months. I see no reason to change my view at this time. The market will be very overbought then, and people will expect a pullback - and another buying opp. That's where the market will fool everyone, and the bear begins. I have maybe 20 symmetries and timing "patterns" converging there, which I cannot elaborate on. But one example is that July is Lucas 76 years to the month from the 1932 bottom.

Forecast top around Sep 2009 coincides with the event of heliocentric Saturn opposition to Uranus.

I suspect this chart is heading for the waste paper basket?
http://s276.photobucket.com/albums/kk34/Blackstone100_2008/?action=view&current=bin.png

The Mr GL pattern is so accurate, but the time frame is not; heading now for or even near point 26.

Its a pity you have not kept up your Mr GL posts this year as the continuing play out this year of the pattern, which has run over the past decade, has been really quite astonishing.

Posibility that on a 10 / 12 year chart DOW could now be approaching point 28.

As I have been approaching this GL concept from a 10 year perspective then perhaps it should test that again in the next few days.

Huw
you were too early

You were right to high light this great pattern, but I just don't get why you didn't read the chart in the 10 year pattern in which it so clearly fitted. Look at it again.