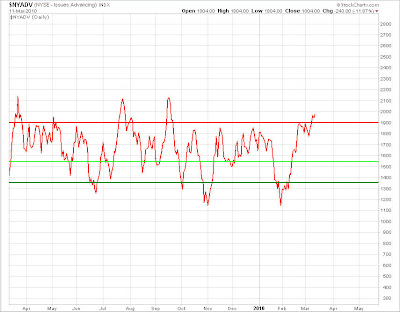 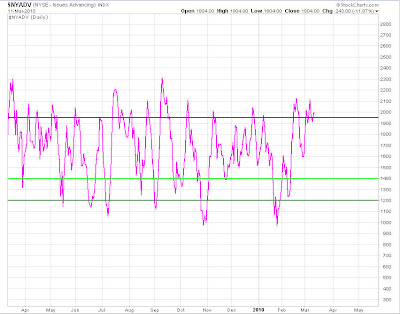 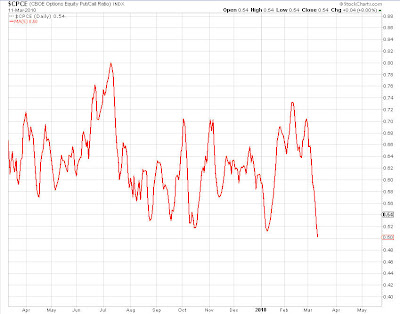 The first chart above this text is a daily chart of the June e-minis. You can see that the advance from the February 5 low near 1040 neatly divides into two equal boxes (purple rectangles). Not only are these boxes the same height (72 points) but they are both 10-11 days in duration.

Today in pre-opening trading the ES hit the top of the second box at 1152 as well as the top of the green dash trend channel I have drawn. Both of these price points are just a tad above the January 11 top. These considerations all suggest that the market has hit resistance strong enough to produce a break as big as the one that separated the two boxes in this chart, i.e. a three day drop of 25-30 points.

There is other evidence that the market is getting a little tired. The second chart shows a five day moving average of the equity put-call ratio. You can see that it has just dropped to the lowest level in more than a year. This is a sign of overdone bullishness and itself is enough to suggest a break dead ahead.

The third and fourth charts show the 5 (purple line) and the 10 (red line) day moving averages of the daily count of the number of issues traded on the New York Stock Exchange that advance in price. Notice that both these oscillators are at "overbought" levels. At the very least this suggests that the pace of the advance is about to slow. The 5 day average is in fact hovering below the highest level it had attained during the current rally - this is a minor bearish divergence and itself suggest that the upcoming break will be the biggest seen in the past 5 weeks.

However, looking further ahead I think both of these advancing issues oscillators are telling a bullish story. They have both reached new highs for the rally from the February 5 low and the ES has reached a new high for the bull market which started last year. This combination means that the rally that started from the February 5 low will continue for at least a month and possibly for as much as four months. After the this brief reaction is complete I expect to see the market enter the 1200-50 range in that time frame.
Posted by Carl Futia at 11:25 AM

I think you have this one nailed. I agree. Thanks for everything.

Great post Carl. Thanks for laying out your thinking and tying in the charts for us.

I always enjoy seeing how you use such a classic technical indicator as the NYSE A/D line, which the majority of "perma-bear" bloggers continue to conveniently ignore.

Goog blog!!
Good analysis!!
Thank you.
Please hold out in the future.

I has put your link on my blog:
forex chart analysis and a cat
...(I'd be pleased if you exchange reciprocal link with me.)