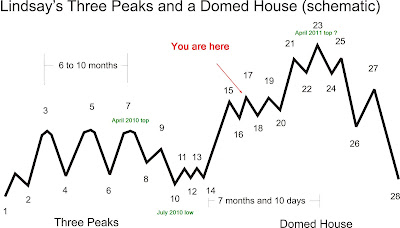 The strength of the rally from point 16 to today's high, point 17 was enough to convince me that the market is probably in a wide trading range than in a substantial downtrend. I now think the downside in the e-minis is probably 1260-70. Over the next two or three weeks I think points 18, 19, and 20 will develop. This trading range should then be followed by a fast rally to point 23.
Posted by Carl Futia at 12:18 PM

I think you are right on Carl.

Carl, the only wild card is the Fed. If the Fed engineers a soft landing by giving proper hints to the market then we may avoid a bear market. We could go the way China has been going over the last year, staying moderately flat to down. Somehow I don't think the Fed will permit the market to crash. It's interesting Bernanke's speech today, it was the catalyst that triggered the market to go down. Is this the beginning of the Fed's change in policy stance? If it is we might see the market go down to maybe 1050 to 1100 over the next few months. is the fed trying to puncture the bubble now before it's to late? We'll see but Bernanke's speech today in Congress seems to be doing just that.

Hi Carl - i particularly like the "bigger" picture guesstimates.

could you describe what point number "28" is? That is, do you view it is a major trend reversal or just a correction. Returning to summer 2010 seems like a major event!

Carl..At that time (the projected April high) are you saying the bull market ends?? And if so, how low do you project we will go?? A retest of the march '09 lows of 667?? Do you think we will break that low?? TIA, Janet

Sorry Carl, but I think your three peaks are not there (only one Apr10), this doesn't look like the formation you're describing.

In theory point 23 (or possibly points 25 or27) should be the bull market top. If this turns out to be the case then the expectation would be for a drop in the S&P and the Dow back to the July 2010 lows.

If we are to believe the doomed house (oops Domed house) theory, how do you intend to position yourself over the long term?
thanks
Michelle

Carl: While I respect your market opinion, I don't see the 3 Peaks & Dome in the U.S. market. Not only is the pattern not there, but Lindsay indicated that in this pattern the market advances are short in duration, no more than equal the times consolidating. The U.S. market has spent too much time advancing.

If you look at the australian all ordinaries and oil, they are certainly in the latter stage of the 3 Peak & Dome. Much better patterns.

Carl I have your book on squares in the market....funny to find you here Do you still use the square of 9