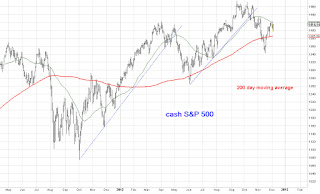 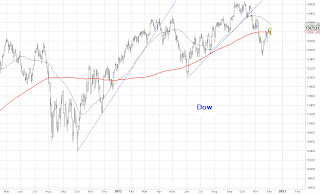 As you know I turned bullish on the averages when the S&P showed strength above the midpoint of its drop from the September 2012 top. Since that time the advance-decline line has rallied almost all the way back to that September top while the big European stock markets have actually been showing more strength than the US.

Another bullish factor is the constant stream of news and commentary about the US "fiscal cliff" negotiations. I think what's happening here is akin to a magician's "sleight of hand". All the bearish talk about the fiscal cliff is background to a market rally. When some sort or agreement is reached a top will probably be near to hand.

A number of Lindsay fans have asked me whether I think the current rally is establishing point 27 of George Lindsay's domed house formation. Frankly, I don't think it matters much because there are examples of points 27 which are the actual bull market top, above the high at point 23. The thing to remember is that the next extended break, whether it begins from  below the September 2012 top or from above it is likely to drop the market below the November 2012 low point.