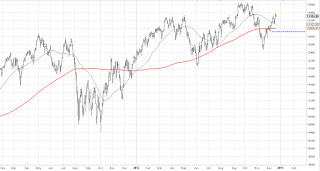 Here is a daily chart of the Dow industrials going back to the beginning of 2011.

I have been watching this average and the S&P 500 average as they have climbed up from their Novmeber lows. My view has been that any down turn from a top below the September 2012 tops would have very bearish implications.

So far the Dow (and the S&P) are maintaining a good pace for their rallies although volume has been relatively low, not unusual for end of the year markets. In particular, the Dow has moved decisively above its declining 50 day moving average (wavy green line) and has retraced more than half of its September-November drop. The only think which would worry be now would be a renewed decline which takes the average below the midpoint of the current rally (blue dash line).

In the meantime I am expecting the market to make new bull market highs above the September top. The 2007 top was 14,279 and if the current rally matches the size of the June-September rally it will bring the average close to that high.

I still think George Lindsay's three peaks and a domed house is operating here. If so the current rally will end in point 27 which probably will be a new high for the  bull market which started in 2009. The prognosis then is for a drop at least below the June 2012 low and possibly to the October 2011 low.

One interesting development is that the current rally may well turn out to be the third peak in a new, 3 peaks and a domed house formation. This opens up some new possibilities from a Lindsay point of view. I'll have more to say about this is future posts.

On weekly charts, the Sept top was the third peak. The Sept-Nov sell-off retraced 61.2% of the rally from Sept 2011. Therefore, it is unlikely that we will exceed the Sept top.

Incidentally, Dr. Carl, how is the patient, the sick US economy, thrashed around by the psychos in the BS goberment, doing?

The Sept peak is the third peak for the rally that started in Oct. 2011.