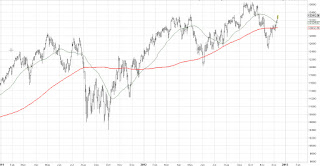 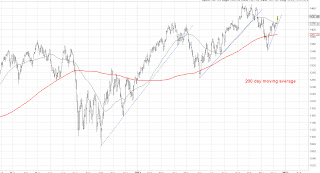 Here are daily charts of the Dow and the S&P 500 going back to the start of 2011. The wavy red line on both charts is the 200 day  moving average while the wavy green line is the 50 day moving average.

Both averages have now moved above their declining 50 day moving averages and are above their rising 200 day moving averages. Both averages have yet to take out their September 2012 high points. Right now my best guess is that these highs will be taken out before any substantial drop begins. But the market is in a vulnerable position and this makes me particularly attentive to any negative price action going forward.

One thing which bothers me is that as of September 2012 the bull market which started from the March 2009 low point had lasted 42 months, significantly longer than a typical bull market. Another negative from a purely technical point of view is that since 2011 the Dow has traced out a nearly classic example of George Lindsay's 3 peaks and a domed house formation. The top of the current rally, whether above or below the September top, is likely to establish point 27 of the domed house. This implies that sometime over the next year the market should take out its October 2011 low point.

There are also three shorter term negatives. First, the Fed announcement today is being taken as good news. Second, the "fiscal cliff" negotiations are widely expected to be resolved by the end of the year. Market tops are often associated with positive news developments and this is a reason to be concerned about any down turn from current levels. A third technical short term negative is that the December rally has produced very clear bearish divergences in my advancing issues oscillators which you can find on my chart page.

Over the years I have learned that there are always good reasons to be bullish and good reasons to be bearish at any given point in time. Even though I am concerned about a possible top here I am going to give the market every chance to make new bull market highs first. If in the meantime the averages start trading below previous weeks' low points I will switch to the bearish side of the market.
Posted by Carl Futia at 2:02 PM

great lesson carl! I really like the way you let the market confirm your analysis - so even if you are cautious on upside, you are letting the market show the way! - Something to learn.

Boy, I feel crazy being on the positive side with that near-perfect 3PDH pattern playing out. We know where this is going. But I am staying on the positive side until my positive/negative numbers reach at a minimum 10.0, meaning 10 times the money on the positive side versus the negative side. The number at the high at the first of May was 11.05. The number at the September Nasdaq high was 11.42, then back up to 10.89 at the early October high. This after the number got down to 1.90 on November 15, when this rally started. Just like it got down to 1.83 at the low in June. It's all very consistent. So I'm expecting that high to come in when we get to 10.0 or above. Right now we're only at 3.87. Lots of doubt about the fiscal cliff keeping that number down. And so we keep going up, probably right up into Carl's range estimates.

There is no doubt in my mind that that high will be point 27.

Going over the fiscal cliff would hurt badly in the short term. However, in the long term, I think that going over the cliff would set the stage for a major bull market and economic expansion. The cliff could get the federal deficit under control, and the consequent recession and bear market could bring forth a terminal downturn for both the Great Recession and the current secular bear market.

It is a cliff only if everyone stops paying taxes. Otherwise, the the government just keeps climbing higher and higher, up the curve on their mountain of debt.

By printing or counterfeiting fiat currency and keeping the interest rates at zero, the central bank, in collusion with the government, is stealing from everyone. The ultra rich just keep owning more and more of the assets. The central bank is monetizing the debt of the government at cost to the present and future generation of average Americans.

It has been proven that the government works for the minority of a handful of the ultra rich; it is no different from fascism or a dictatorship moving towards a police state. Democracy needs to be practiced at home first.

Unless the criminal and crooks who are controlling and running the government, and, of course, the stock market are convicted, there is no cliff; only more and more of the same BS from the goberment.