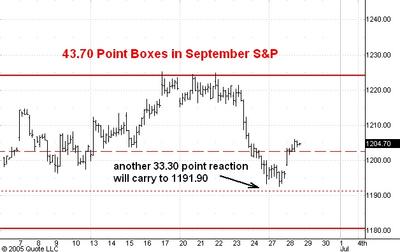 I want to take another look at the September S&P futures. The hourly chart above shows the 43.70 point boxes for the uptrend from the April daytime low (in the June contract) at 1136.80.

I have been thinking that 1193 would be support based on the fact that at 1191.90 the market would have duplicated the biggest reaction in the uptrend thus far. The question is: have we seen the reaction low?

My guess is that the market will take a stab at the 1190 level but won't break it by much. The best time for such a "false breakout" would be after the Fed announcement at 2:15 pm ET on Thursday.