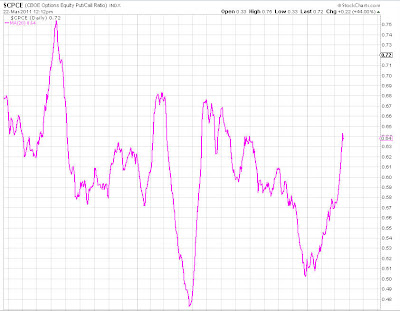 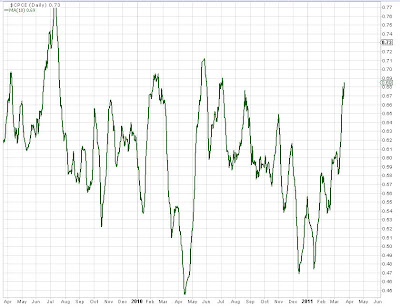 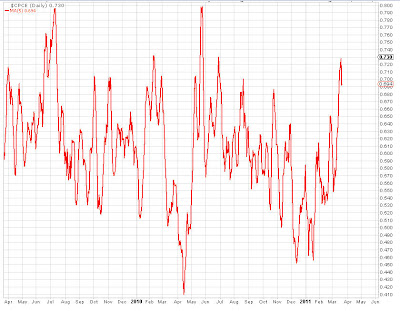 Will the low made last week in the cash S&P 500 at 1249 hold? Has a move to new bull market highs already started?

I think there is enough bearish sentiment around to support a strong up move. Take a look at the charts above. The top three are the 5 day (red), 10 day (green), and 20 day (purple) moving averages of the equity put/call ratio for the CBOE (charts courtesy of StockCharts.com). The chart right above this post is a daily chart of the cash S&P 500.

You can see that the 5 and the 10 day moving averages are very close to last year's high points reached during the April - July drop. The 20 day moving average is not there yet but it is getting close. This is particularly bearish sentiment in light of the fact that the S&P dropped only 7 % from its high vs. the 17% drop in 2010.

One factor behind this increase in bearish sentiment is "radiation hysteria" arising from news of the Japanese earthquake and tsunami disaster. All the more reason to fade the bears.

Sending the same message is the latest reading of the AAII market sentiment survey. Last week's number showed the greatest percentage of bears since early last September when the market was just starting a 30% rally.

So, what now? As you can see from the S&P chart above this average has rallied almost as far as its 50 day moving average (wavy blue line on the chart). If the market is going to drop to 1230 as I expect we will not see any close above the 1305 level in the cash S&P. Any such close would turn me bullish and tell me that last week's cash low at 1249 will hold.

In either case I think the S&P will reach new bull market highs within the next two months.
Posted by Carl Futia at 12:15 PM

What an insightful post and exactly what I needed to read this tough trading times!
Thank You.

Just as long as POMO continues to Pump we will continue to go higher.

Thanks for the update.

Hey Carl, If you had April Calls for AAPL at 340 and 350 would you roll them over for May or June?

i tend to agree with you about the spx as well as the bearish sentiment . however i also think that we will see a low point in early may and higher prices into mid july if not mid aug or sept before a bull market peak is seen.
my bias comes from my own cycles work and today is an important day for me . the 60 minutes transports chart looks like a 5 wave down pattern yet ill admit it is taking its sweet time extending lower as the dow has yet to break this mornings low . any close above 12031.50 on the dow would give me a bullish signal today .
good luck
joe

It is hard to tell right now. From a technical perspective if the market is going to go down to 1230 it'll have to drop at least 30points by the end of the week (that would be normal after the strong rally we had from the lows last week) and the VIX go back up to 30. If that doesn't happen the bulls will have the upper hand. From a fundamental point of view it gets more complicated, the oil spike and tsunami did more damage to the economy than what the market is taking into account. Also earnings season starts in 3 weeks and company forecasts won't be as rosy and will reflect the damage done to the economy by recent events.